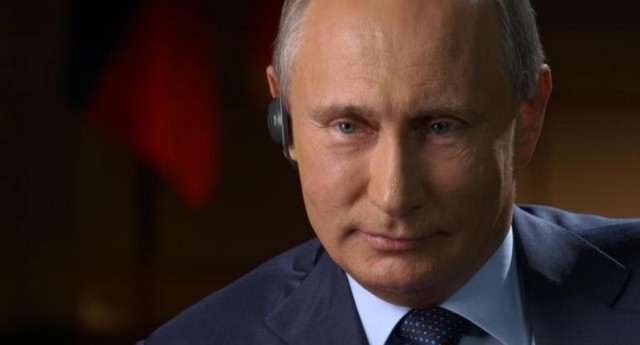 Despite signing into law the controversial anti-gay propaganda law, the Russian President claims GLBT people face “no persecution at all” in Russia.

Speaking on 60 Minutes, Vladmir Putin has claimed that Russia’s GLBT community faces “no persecution at all” and says that the perception that they are discriminated against is one that comes from the west. Putin explained that “the problems of sexual minorities in Russia had been deliberately exaggerated from the outside for political reasons.”

Putin also made the claim that GLBT Americans face a higher degree of oppression than GLBT Russians. When asked to explain the situation he went on to say: “It’s well known that in four states in America, homosexual orientation is a crime… It’s not completely removed from American legislation, but we don’t have that.”

While those laws technically remain on the books in four US states, they were invalidated by the 2003 Supreme Court ruling in the case of Lawrence vs Texas.

Putin went on to say “I believe there should not be any criminal prosecution or any other prosecution or infringement of people’s rights on the basis of their race, ethnicity, religious or sexual orientation.”

In defending his 2013 anti gay propaganda law, Putin says “we have a ban on gay propaganda aimed at minors.  I don’t see anything un-democratic in this legal act.”

“I believe we should leave kids in peace. We should give them a chance to grow, help them to realise who they are and decide for themselves. Do they consider themselves a man or a woman? A female? A male? Do they want to live in a normal, natural marriage or a non-traditional one? That’s the only thing I wanted to talk about.” Putin added.