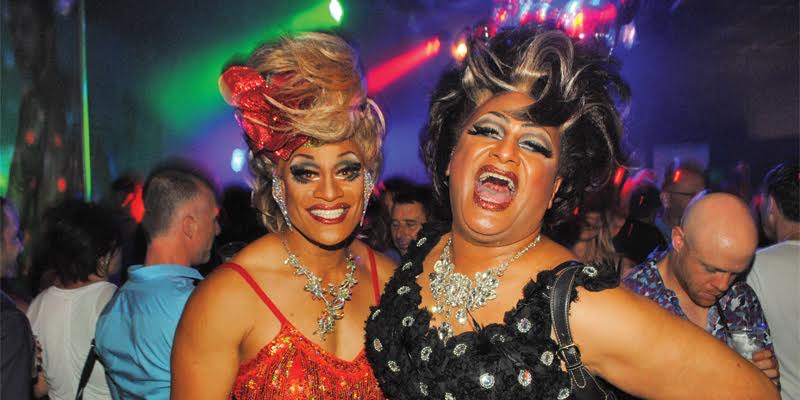 STAIRCASE: A MOMENT IN HISTORY

Anyone who dares claim Staircase was just a gay bar will find themselves sorely mistaken. Traversing three different venues over three decades, this queer mecca was always ahead of its time. Opening its doors long before the Homosexual Law Reform in 1986, Staircase was both a place of frivolity and celebration, and a sanctuary for queer New Zealanders who were forced to live in the damp shadows of a close minded society.

Tess Tickle, an original Staircase drag performer comments that “everything [about being gay] was underground. It was very taboo to come out publicly and there was a lot of secrecy around it”. But in spite of this operating within a time where expressions of homosexual love and desire were punishable by law, the heart of Staircase beat like a war drum in the centre of gay culture in New Zealand.

“It was a safe place” drag legend and original Staircase performer, Buckwheat, explains, “we were all illegal, and that is what brought us together”.

Buckwheat and Tess revealed to express that they were frequenting the bar before they had left high school. For them, it represented “a safe and encouraging environment” that could not be found elsewhere in New Zealand. Alas, while it is without question that Staircase played a significant role in the realm of gay politics, Tess assured express that it was also the scene of unbridled frivolity.

“Meeting place, that term is very loose. It was more of a pick up joint” she teased, elaborating, “there was no internet, there was no grindr. Everything was old school, and you had to go and meet in a bar”. Oh, how times have changed! Staircase was just as important to the queer dating scene as it was to fostering unity among this marginalised group.

So, Staircase was more than a bar. It was a meeting place for a disenfranchised community who wanted nothing more than to live their truth within society.

“There were few community places for people to assemble, so everyone came together at the old Staircase on Fort street” renowned Sydney based drag star Bertha the Beast comments, recalling the role that Staircase played in nurturing a sense of community during a time when being gay was against the law.

“I remember when it [The Homosexual Law Reform] was passed and there was a great big gathering of people at Staircase. It was a beautiful night. People were playing piano and people were singing.”

The legendary venue not only promoted change in queer politics, but was also at the forefront of New Zealand nightlife as a whole. “It was the Staircase on Albert Street that lead the change for the late night closing” Buckwheat informs express, “we were the first club to get extended hours. Staircase put that into play”.

Alas, Staircase also had it’s struggles. Facing growing stigma concerning HIV in the gay community during the mid eighties, Tess comments that “there were scare tactics happening in the community” regarding the “dangers” of homosexuality. Yet even in the face of adversity, Staircase flourished. Bertha comments that “while there was a celebration of the Homosexual Law Reform, there was also a new depth to community because of these HIV/AIDS related deaths within the community”.

THE LEGACY OF DRAG CULTURE AT STAIRCASE

First, there was Bertha the Beast. From modest beginnings in Mangere, Bertha shot to stardom on the stage of the first Staircase in the mid 80’s. Her quick tongue and larger than life personality quickly enshrined her as New Zealand’s ultimate drag mother.

Bertha lead the way for some of the most influential drag artist of our time. Buckwheat, Tess Tickle, the late great Bust-Op and Bambi Slut, Shanice Van Dyke, Venus Mantrapp and Tatiana all followed in her footsteps, and graced the various stages of this unforgettable venue.

The prevalence of drag culture within Staircase was undeniable, and played a larger role within the venue than simply entertaining the community. Tess admits that the first drag show she ever witnessed was at Staircase; something that had a huge influence on the rest of her life. In turn, she

then did the same for patrons watching her.

“Drag artists bore the brunt for people who were nervous” Buckwheat comments, explaining that the presence of drag culture within Staircase helped to show young people that their feelings and desires were nothing to be ashamed of.

According to Bertha, it was after the Homosexual Law Reform was passed that drag and queer culture “went from something that hid in the shadows, to something out in the open”. However, this was a gradual change. “Even though a law is passed, you have to go through a passage of time in order for things to change”. Needless to say, an art that started in the shadows of Staircase soon steam-rolled the queer community, and in time, entered the fringes of mainstream culture in New Zealand.

The Drag Queens of Staircase were not only the figureheads of the venue, but also played a significant role in the support of the LGBTI+ community.  Leading by example with their lavish costumes and out-going natures, Bertha, Buckwheat, and Tess ensured that everyone who ventured through the threshold of Staircase knew it was an inclusive, accepting environment where those who existed in the peripherals of society could live their truths.

We can see the repercussions of the trio’s influence clearly in recent generations.  Buckwheat explains how drag artistry “helped people in the same space feel more comfortable about who they are. It gave them the self assurance that if they can do it, we can do it too”. She continues, “What we know now is a whole different ball game”.

It is without doubt that these Pacific performers impacted on the influx of Pasifika drag up-and-comers in New Zealand. “Drag definitely has an influence on our community” says Tess, and Bertha adds that the trio brought to light a natural affinity for performance among the Pacific community, outside of the confines of religion.

Proudly supported by 28 Black and LYC, the 2016 Waitangi Weekend resuscitation of Staircase  cannot be missed! On Saturday 6 February, the historic Galatos venue off Karangahape Road will boast an eclectic mix of patrons for the mother of all gay parties! Whether you are a Staircase aficionado, drag enthusiast, or shy curious closet case – this three levelled 20th Century time warp will take you back to the golden era of gay nightlife in New Zealand.


“If you were there on the dance floor at the Staircase Reunion of 2014, you will remember those fabulous feelings of ‘coming home’ that we all felt, shaking and shimmying to the euphoric sounds of our beloved DJ’s” comments Bertha, noticeably exhilarated, “It is going to be all about a beautiful room, great music and happy people”.

Talking to express, Tess and Buckwheat reflect on the unique Staircase vibe, raving about the resurrection of some of the gay world’s best love tracks. “It was such a cool collection of music” she says, “and we are bringing it all back for the reunion”.

Doors open at 8pm, and don’t be late, because not only are the three original Staircase drag legends returning, but they are bringing three Staircase DJ’s with them! International DJ Alex Taylor, Bevan Keys and James Leuii all return to the turntable in what is sure to be the year’s greatest celebration of rainbow anthems. With Steven Oates, Anthony Jones, Mauri and Karl Moser rounding out the DJ roster across all three floors of Galatos, this party is guaranteed to stay pumping right through to 4am.

Live performances will be taking place throughout the night, including vocal performances from Cindy of Samoa, Leon Wharekura, Victor Hawkins-Sulfa and friends. And best of all, be watching the main floor for dramatic re-enactments of your favourite Staircase drag shows that will shake the stage at midnight, 1am and 2.30am. Get pumped for the huge cast of stars like Bertha, Buckwheat, Tess Tickle, Coco Kane, Chanel D’Vinci, Victoria Secretz and dancers Anton Fassler and James Luck and a late show from the inimitable DeeZaStar!

Tickets are selling fast via iTICKET and in person at Real Groovy, Marcello’s Caffé, Garnet Station and The Eagle Bar.