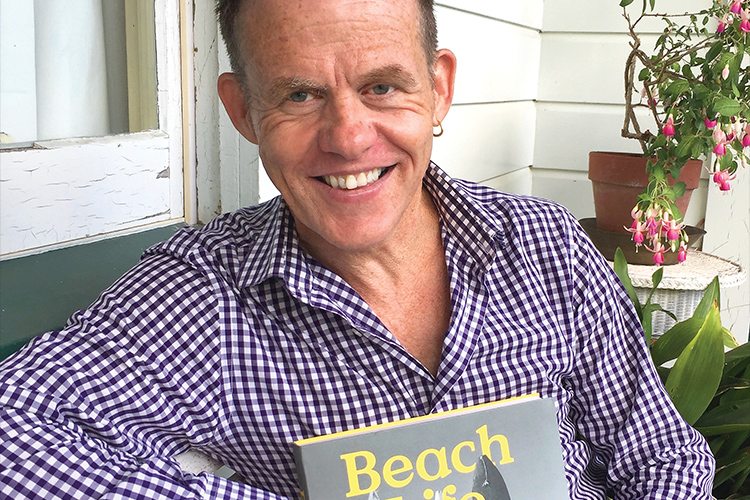 And it does exactly that, celebrates the beauty of New Zealand’s great outdoors. Exploring everything from the more conservative ‘20s to the scantily-clad ‘50s, highlighting throughout that the beach is an intrinsic part of New Zealand’s cultural life. Using an incredible range of photographs, Jenkins provides a colourful account of the ever-changing trends and pivotal influences that have shaped New Zealand society today. The award-winning writer sits down with express to discuss his inspirations, his favourite Kiwi beaches and most importantly, the dreamy hunks in trunks.

Tell us about Beach Life.

It’s a celebration of beach culture. I was really interested in looking at how New Zealanders behaved at the beach, intertwining that with the architecture, design and fashion. As a gay man, the beach has always been about sex. It’s about pretty young people and I wanted to talk about how they change the way we think in more ways than we realise.

There are some beautiful images in the book.

I love the images, they say so much. I often write to illustration. The book starts with an image of religious people on the beach trying to cover people up and when I first saw that photograph I knew immediately that was the start of my book.

What are the inspirations behind Beach Life?

The question of ‘what is this all about?’ As a kid I was a freckly pale-skinned redhead, so I was always the outsider at the beach, but I’ve always been intrigued by it. I like writing about New Zealand history and culture and taking it apart and examining it. Plus no one has really taken on the idea before.

There are so many beautiful beaches in New Zealand. What is your favourite?

I’m an Auckland boy. When I was growing up the prime spot was Takapuna and I actually still really like it there, the view to Rangitoto Island is just stunning. I’m not one for the big empty beach in the middle of nowhere even though they are very beautiful, but I’m more into the urban beaches that are surrounded by houses and lots of people. One of my favourite things in the book was finding out about Milford, which in the 1920s was the hot bed of vice and sexual carry-on. It’s funny now because it’s so empty there.

In my mind, that’s the point in time where we started to get modern. If we went back to the 1920s now, then we would still kind of know what’s going on. It’s where things stopped being Victorian and where people started to take their clothes off and that’s what makes the beach so interesting.

Were you a beach-goer when you were younger?

I grew up on the North Shore so I was surrounded by the beach, but as I mentioned I was prone to burning and being fully-clothed on the beach as a teenager wasn’t any fun.

How do you think the beach has changed New Zealand culture?

I think our casual attitude especially in fashion is inspired by the beach. If you look out on the street most people look like they’re somewhere between the beach and the gym, so it’s definitely made New Zealand culture more casual. Also the beach is a very levelling place because if everyone is just wearing togs then it’s hard to understand notions of wealth and class.

How much have beaches helped lead social change in New Zealand?

A lot! Particularly in the early 1920s where they were actually thinking of banning daylight bathing. They believed swimming should only happen early in the morning or late in the evening once the sun had gone down because it was linked to immoral behaviour. Things started to change when young men came back from the war and simply said no, they started to roll down their tops and roll up their trousers and refused to be dressed head to toe while swimming. Also, being at the beach used to be the closest place that you could get to the opposite sex scantily-clad without being married, so it was a huge change.

How do you think beach etiquette has changed over time?

One of the funniest things I learnt from the book was you were supposed to wear a raincoat over your bathing suit while sitting on the beach and then take it off when you go into the water, but that didn’t last for long. Before World War II, the emphasis on the beach was the male body but after the war, it switched to the female. They used to have beach beauty contests where thousands of people would be watching and the women would be dolled up wearing their corseted bathing suits and bright lipstick. That was during the ‘40s and ‘50s, but then during the ‘90s people reverted back to covering up on the beach because they would freak out about the sun.

Looking at cute guys! No, I love the water, I really like sailing or rowing.

What’s your opinion on nudist beaches? And how did that begin?

They’re great. Nudism came from Germany and spread around the world in the ‘30s as a health fad. Men would always end up getting fined but women managed to get away with it by saying that they needed to get the sun rays all over their bodies for health reasons.

What do you predict for New Zealand’s beach architecture in the future?

The problem is as New Zealand becomes more and more populated there is less beach to go around. The land that surrounds the beaches is in great danger. I don’t see anything stopping this continual development of building big beach houses, although nowadays rich people are buying their own islands!

How would you describe your perfect bach?

The old bach is my favourite because you’re just a little bit away from camping. It is essentially a very simple structure, with a flat roof and a combination of old tired furniture that has come from your house. It would be full of sand and sunlight.

That’s a hard question. I have a secret thing for pirate novels.

In what promises to be one of the best reads of the summer and a definite favourite here at express, Beach Life is available for purchase from all leading bookstores.