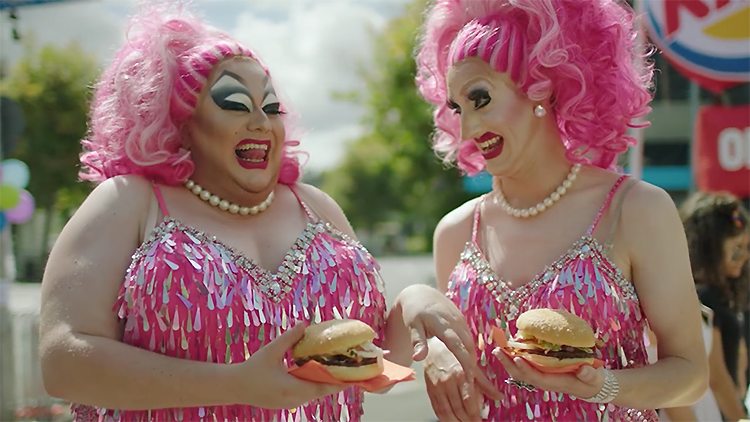 AAMI has seized the opportunity to embrace acceptance and draw attention to its humorous campaign for roadside assistance with this delight, that also draws on an Aussie classic, Priscilla Queen of the Desert. The ad features Australian queens, Art Simone and Philmah Bocks, on their way to Broken Heel Festival, when their car breaks down in the desert. Luckily Bocks knows about AAMI Roadside Assist and the two are back on their way in no time.

Similarly, Burger King NZ has featured Auckland queens, Kita Mean and Anita Wigl’it in their campaign for Backyard Burger King. Filmed at this year’s Auckland Pride Parade, the ad talks about how BK is proud to embrace choice and finishes with Kita exclaiming “I feel like a Burger Queen!”

We spoke with Kita and Anita about what it was like working with Burger King and the response they’ve had so far from the campaign:

KM: There have been mixed reactions to the ad.

express: Yes, I was reading the comments! Some people man.

KM: Personally, it was a chance for Anita and I to do something that we have dedicated our lives to, on a bigger scale. We had a lot of fun! We were actually there for two hours cooking and serving burgers, so it was a lot of fun interacting with parade-goers and feeding them while having a few laughs.

AW: It was amazing working with Burger King – good on them for being so open minded! It was a hilarious and fabulous shoot that gave a little light-hearted humour to the good ol’ Kiwi BBQ. It was a shame to get negative feedback from a few select people – but it doesn’t worry me at all! They are the ones with problems and the overwhelming support from complete strangers was very amazing! Homophobia is a dying breed but it still poisons New Zealand. The best thing to do is to get on with my life and focus on the people who enjoyed it and see us what we really are – two ridiculous people having a lot of fun for Burger King.