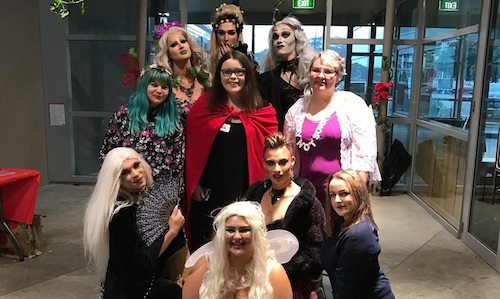 Wellington Pride threw their first youth ball on March 18, which saw around 200 youths attend, ready to dance their rainbow socks off!

Youth leader, Bella Simpson, organised the event and said people had come from as far as Otaki and the Wairarapa to attend the event.

The theme of the ball was ‘Fantasy Forest’ and took place at the Chaffers Function Centre located next to Waitangi Park – which also served as the site for Saturday’s Out in the Park celebrations.

Simpson collaborated with a team of young people in order to organise the event and says that “It’s so important for young people to know there identity is valid and recognised, hosting events like this shows them they have a space in our community to be whoever they want to with out judgement and prejudice.”

Ball-goers were welcomed upon arrival by a group of drag artists, dressed in their glittery-best, wearing rainbow flags as capes, and unicorn headpieces.

A support group of adults was organised by Jac Lynch, who said in a statement provided by organisers that “It’s hard for some young people to enjoy their own school balls because of discrimination and ignorance. Tonight, they’ve been visible in how they want to be.”

The 20+ support group consisted of youth workers, school counsellors, teachers and paramedics who not only provided security throughout the night for the youths, but also offered rides home to those who needed them.