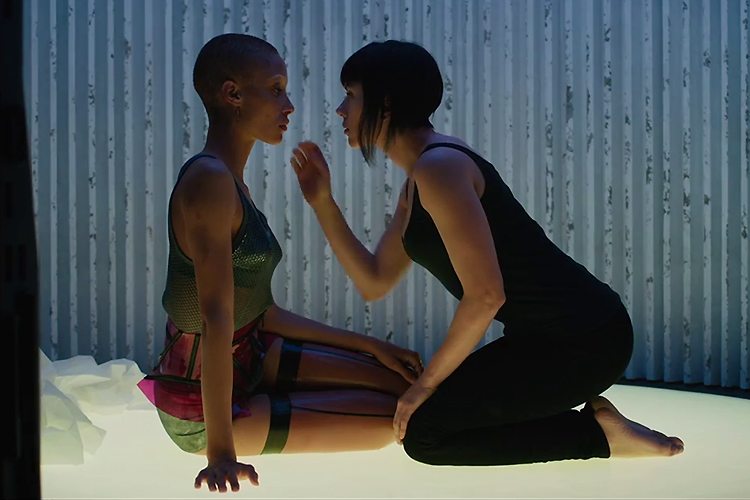 Scarlett Johansson’s live-action film version of Ghost in the Shell is facing allegations of queer-baiting and straight-washing.

When fans first learned that American actress Scarlett Johansson would play the role of Japanese anti-terrorism investigator Major Motoko Kusanagi in the film version, many objected to the white-washing of an Asian story. But now film writer David Opie has pointed out that the film’s original trailer included a lesbian kiss that never appeared in the film – was Ghost in the Shell ‘straight-washed’ too?

In the original manga and anime, Major is depicted as bisexual and is seen having sex with another woman as part of a cyber-prostitution side-gig. At another point, she seduces a teenage boy and talks about “the first boy she ever loved.”

In the subsequent anime, Ghost in the Shell: Stand Alone Complex, she is shown half-naked in bed with two other women.

The trailer for this year’s remake teased a lesbian scene and made it look fairly lengthy (the scene appears around the 1:00 mark).

But in the final film, fans who were hoping to see this side of Motoko were left disappointed as the kiss was cut from the finished product.

Opie was first to comment on the missing scene, saying it could have been ‘refreshing’ to not focus on Motoko’s sexuality. “Sanders [the director] and his team did ultimately sexualise her character through numerous action scenes featuring Johansson in the nude, which arguably reinforces how the lack of bisexual representation here is even more of a missed opportunity,” he said.

“Sure, Motoko’s body may just be a ‘shell’, but if the remake had taken longer to explore the complexities of her ‘ghost’ instead, then we could have finally seen the first openly bisexual action hero on our screens.”

While the trailer’s same-sex kiss didn’t make it into the film, the film did keep the original scene which shows Major and another woman — who seems to be some sort of sex worker of the future — exploring the cybernetic attachments on one another’s bodies. Their interaction is short-lived and based more on curiosity than desire.

Considering how often Hollywood action films pair up their female stars with male love interests, it’s refreshing to see Ghost in the Shell not follow suit. But we agree with Opie that Ghost in the Shell missed an opportunity here to give viewers one of the first lesbian or bisexual action heroes.

However, Charlize Theron’s upcoming project Atomic Blonde — in which she plays a bisexual MI6 agent – hits theatres 28 July, so we have that to look forward to.

The film’s creators have not yet explained why the kiss disappeared. Maybe the kiss will get restored in a future director’s cut or as a DVD extra? We can’t really know.