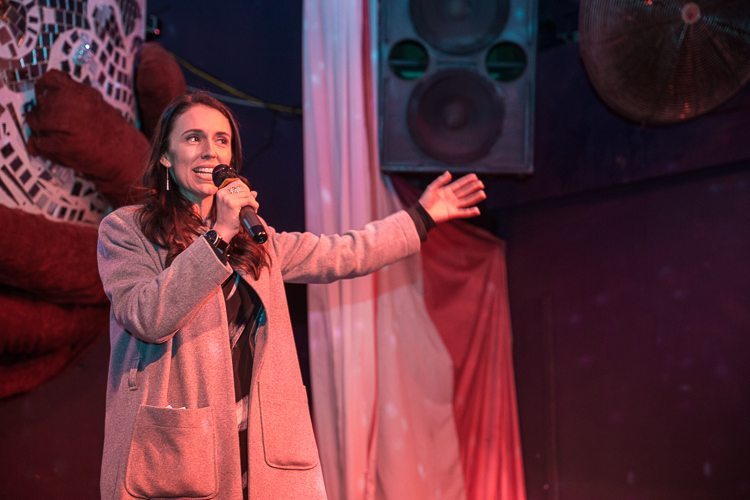 Whether you’re a fan or you’re not, Jacinda-mania has well and truly taken over the nation – and our media – this election.

At the time of writing, 50 percent of those who took part in the express online poll said they would vote for the Labour Party if the elections were to be held today. Just over 28 percent of people said they would be voting for the National Party, with the Green Party the next in line at 12 percent.

We chat to a couple of voters from either end of the red-blue divide to get their take on the state of politics this election year.

Aych McArdle is human rights activist based in Tāmaki Makaurau and a big fan of Labour leader Jacinda Ardern.

“Jacinda has a brain that I am so envious of and this incredible warmth and pragmatism in the face of adversity that I aspire to,” they say. “I feel like Jacinda is a leader I can trust to do right by those finding it most tough in our society, including our rainbow communities.”

They believe many people in the sexuality and gender diverse communities are coming out in support of  Labour because of the party’s newly announced rainbow policies.

“This is the first time we have seen a major party strongly commit pre-election to prioritising trans and intersex related healthcare, legal protections, mental health, HIV research and positive ageing for our communities.”

Aych’s whānau came to Aotearoa looking for work and opportunity. “They left behind a community struggling with high levels of unemployment, slum housing, the environmental impact of rapid industrialisation and a social fabric that was being tested by a tough post war economic environment in their community.

“I’m gutted that my Gran can see the things they left behind materialising before their eyes in Aotearoa – education that seems out of reach, landlords getting away leasing out substandard rentals, rivers that are making us sick and a healthcare system that is so rundown it doesn’t have our back.

“New Zealand offered my whānau a home. I want to make sure that it lives up to the dream my Grandparents and Mum had for their new beginning. And I believe that a Labour lead government will be a huge step in the right direction.”

Aych says the key issues for them this election include “legislative protections for our trans and intersex whānau in the NZ Human Rights Act,  accessible housing and healthcare for our rainbow communities.

“Also rainbow people being able to play meaningful roles in our communities, school and work!”

And the Jacinda-effect? Well, Aych says it has energised the election.

“I think many people around the country are really connecting with a sense of change, of a new generation stepping into leadership. Helen Clark always said when she left it was time for the next generation of politicians to have their time. I think that time is now!”

Leaning a little more to the right, Stephen Laidler believes Ardern is a high achiever with good intentions.

While the express poll may show a great chunk of our online readers are left-leaning, Laidler thinks people vote how they vote regardless of gender or sexuality status which does not define political beliefs.

“Arguably a government that is focused on economic development if they are able to achieve success in this area, is better placed to grow an economy with more funds available to target issues that affect queer, gender diverse and intersex communities.”

“A government that places an emphasis on developing trade relationships with other countries understands the importance of maintaining position with our trading partners, the United Nations etc on thinking around human rights and making some improvements to bring New Zealand more in line with practices seen as human rights in other countries but practically are not accessible to New Zealanders.”

While both Labour and the Greens have announced policies that specifically cater to sexuality and gender minorities, National are yet to do so.

“Perhaps it has not historically been considered as a significant issue, affecting a significant enough percentage of the population to warrant special consideration,” says Laidler.

“ I think today there is more public compassion towards gender and sexuality non-conforming people, and political parties and politicians face less risk of public or voter backlash than they might have in the past by being seen as sympathetic to LGBT+ or intersex issues.

“I expect that at some point in the near future National might respond to interest in having some developed policy in this area.”

Issues of big concern for Laidler this election include the right to employment, acknowledging that for that to occur there needs to be more employment opportunities.

“I also think housing availability and affordability is a big issue for the average New Zealander. It needs to be more achievable for more people to have stable rental accommodation. Transience is a big issue for children in schools, where they are frequently moving from one school to another. For low-income families, stable rental accommodation will be a factor in this. Home ownership should be more achievable as well. I think we also have some challenges to address in the area of social development, to see that New Zealand doesn’t gain an entrenched class system with a group of people stuck in poverty, viewed or treated as an underclass, and as a result of that unable to participate fully in society.

“Mostly I am interested in how we as a generation leave the country and world around us in a better state than we found it, and cater to a better society and future for our children’s generations and theirs to come.”

To have your say this election, be sure to check your eligibility online and if you don’t beat the crowds at an advance polling booth, be sure to get out and vote on 23 September.