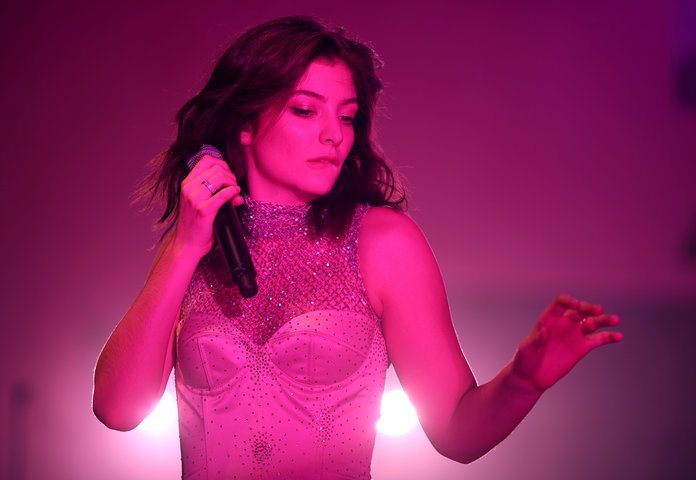 Like a true pro, Lorde appeared on the Powerstation’s stage within moments of the clock hitting 9.30pm. David Dallas had warmed up the crowd – he was one of a rotating cast of kiwi support acts who had each been selected to open one night of the tour. He proved to be the perfect hype man!

Clad in a dramatic black ensemble, that felt like a tasteful gothic prom dress; her look, combined with her vocal skills and stage presence highlighted that she truly has become the complete pop package. So much so the two dancers that join her a few songs in, were rendered inconsequential, as Lorde never gave her audience a reason to take their eyes off her star power.

The concert was performed in three acts, with a costume change and a rotation of neon-light staging signifying the beginning and conclusion of each. An effervescent first set lit by a giant jandal clad spaceman, gave way to a cooled down middle, where Lorde showed off her vocal chops with: a touching rendition of ballad Liability, seldom performed original cut Bravado (from her Love Club EP) and an emotional cover of The 1975’s Somebody Else; all while pointedly wearing a sparkling white wedding-like gown under the light of neon stars.

The final act that played out under an arch of neon flowers, saw Lorde don a transparent body suit to perform a parade of hits including: Royals, Perfect Places and Team; before closing with an energetic rendition of Green Light enhanced with confetti canons. She returned to the stage for a final encore at first hushing the crowd to give them an accapella performance of Writer In The Dark, before encouraging everyone to sing along to Loveless – highlighting in the process that she was holding everyone in the palm of her hand.

This was one of those really special gigs that make Auckland such a unique and wonderful city. It reminded of the thrill I got seeing the likes of Kanya West and the Pet Shop Boys perform at The St James and the feeling of not believing you could get to see such a high calibre artist in such an intimate setting.

… And this tour highlights that Lorde’s career is only just beginning!