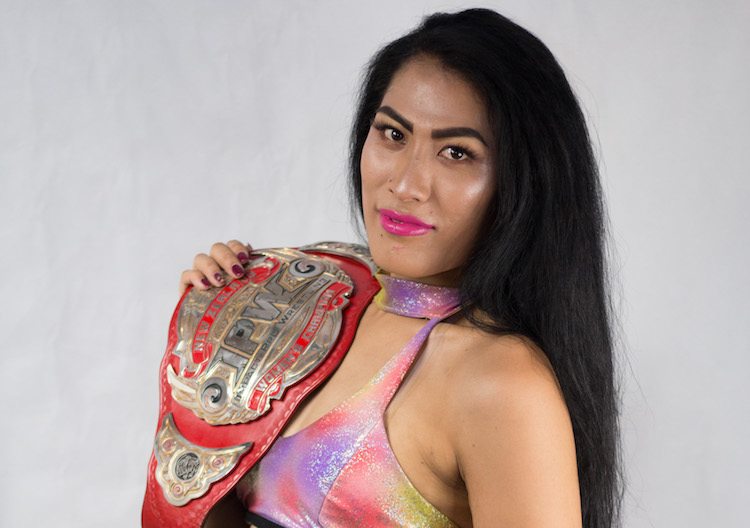 How did you get into Pro Wrestling, and what inspired you to create your Candy Lee persona?

From a young age I was a fan of wrestling. The first time my family put a WWE women’s match on the TV I was hooked. I knew that’s what I wanted to do right away. My inspiration for Candy Lee was my favourite wrestler Candice Michelle, so I chose my name to honour her. I wanted to portray someone sweet, bubbly and fun, and I felt that Candy summed that up. It’s also short and easy to remember. I love puns and wordplay, so it’s interesting to create names for my signature moves based around the name. Like my finishing move, which I’ve called the Candy Crush.

You came out openly last year – has this let you explore another side to Candy Lee? How did your fans react to the news?

It’s definitely helped me with my confidence, I’m usually quite shy. But being able to be true to who I am has lifted a huge weight off my shoulders. I’m proud to be me, but I used to be quite self-conscious about people talking behind my back. Most of my early fans already knew, so I had so much support. If anything, I can say that my fan base has grown hugely and even expanded overseas.

How does it feel to be the first transgender New Zealand Women’s Champion? Do you feel like you have a responsibility to the LGBT+ community?

I’m really enjoying it. I feel like I’ve worked so hard, sacrificing my time and body to get here, it’s so rewarding to be recognised as the champion. When I first begun, all I wanted was to learn; my goals were to have a first match in front of a crowd. I didn’t set my sights beyond that because I didn’t realise how much of this would be available to me. In a way I feel I have a responsibility because I’m the first in New Zealand. I’m in the spotlight so I have to set a good example for young people. I never really intended to be, but I enjoy it now. I wish I has more role models like me growing up.

Your next title defence is in May at IPW XV, when you compete against the Heart of Shimmer and PWWA Champion Shazza McKenzie from Australia. How do you think you will fare in this match, and what kind of preparation are you doing?

I’m very excited to be facing her. She’s what we call an ‘Indy Darling’ and an Australian wrestling icon. I know it will be extremely challenging. She is very experienced, she’s even wrestled on TV for NXT. I’ve been studying her matches; some of our style in ring is quite similar, it might end up being the battle of the Split Leg Drop! I’ve really focused on cleaning up my diet so I can perform at my best, and I’m in the gym every day. When IPW XV arrives, I know I’ll be ready for her.