Rainbow leaders from around the world celebrate how far we’ve come but urge everyone to keep fighting for our rights and the rights of others.

At Rally WorldPride 2019’s Stonewall Commemoration event held today in Manhattan, it was acknowledged LGBT rights are at a crossroad.

In the host country, the United States of America, same-sex marriage is now legal nationwide. Yet the Equality Act which would unite all States banning discrimination against LGBT people faces fierce opposition in government. Currently, in 28 states it is still legal for a company to fire an employee due to their sexuality or gender identity.

Worldwide marriage equality has been passed in 28 countries, however, in 69 other countries, LGBT acts remain a crime.

Rally’s long line up of speakers examined these facts from different angles, but with one united message: We must keep fighting.

“I am the mayor of the largest LGBT community on earth and I am proud of that!” Announced New York City Mayor Bill De Blasio, declaring 28 July Stonewall Day in the Big Apple.” 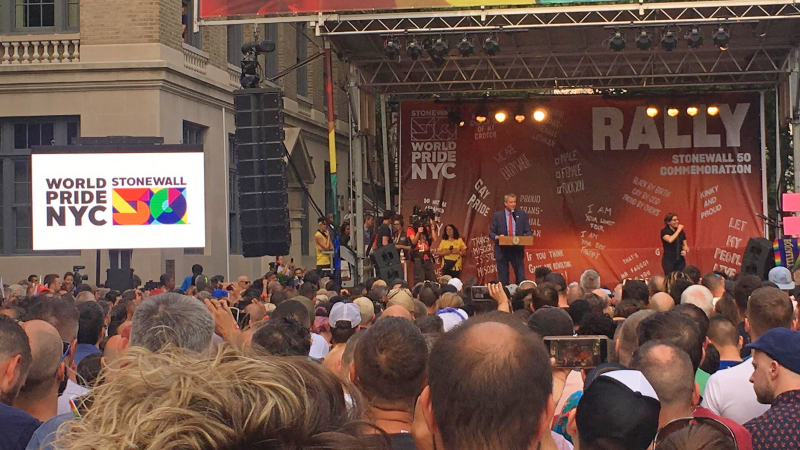 “We will be the first city in the to have statues of our trans heroes who fought for our rights,” he told the huge crowd acknowledging Stonewall’s original rioters Marsha P Johnson and Sylvia Rivera. “They would expect us to write the next chapter for them.”

Barbara Poma the owner of Florida’s Pulse nightclub which in 2016 lost 49 of their patrons in a deadly mass shooting, encouraged younger LGBT and those who were not present at Stonewall, had not lived through the AIDS epidemic of the 80s to “read up on your histories and thank those before who before you, who’s shoulders we stand on. It’s thanks to them we can live as authentic selves!” 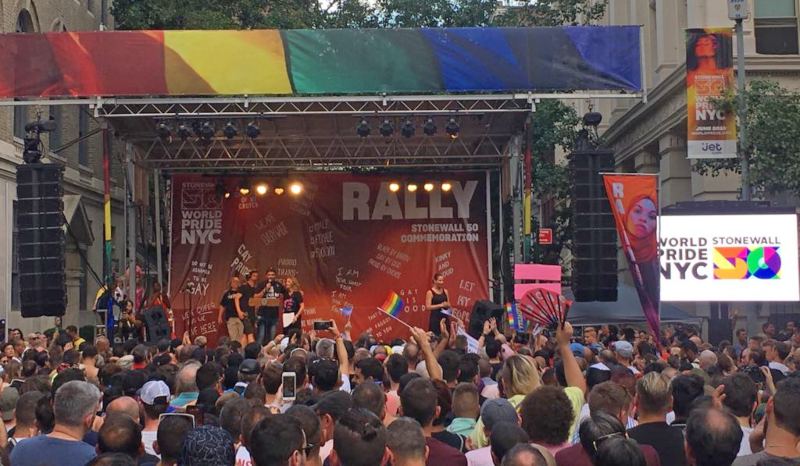 Poma’s speech was followed by a loud chant of ‘gays against guns’, from the ever-expanding crowd.

15 of Australia’s 78’ers were present at the event, including Robyn Kennedy who gave a rousing speech. One of 178 people arrested for rallying for gay rights in Sydney in 1978, Kennedy proudly announced, “like Stonewall, we kept fighting.”

The backgrounds of Rally’s speakers were diverse.

Harnamm Kaur, a queer motivational speaker and a member of London’s Punjabi community (who due to a rare condition grows a full beard) aimed her message at those who do not identify under our rainbow. “You can look at us and admire or you can walk on!” She stated.

Monica Helms, a US Navy veteran who created the first trans flag, back in 1999, donated her original creation to The Stonewall Inn where it will be put on display.

Rally was the culmination of a number of events held worldwide to celebrate the historic uprising and was a fitting tribute to the brave rebels who paved our way.