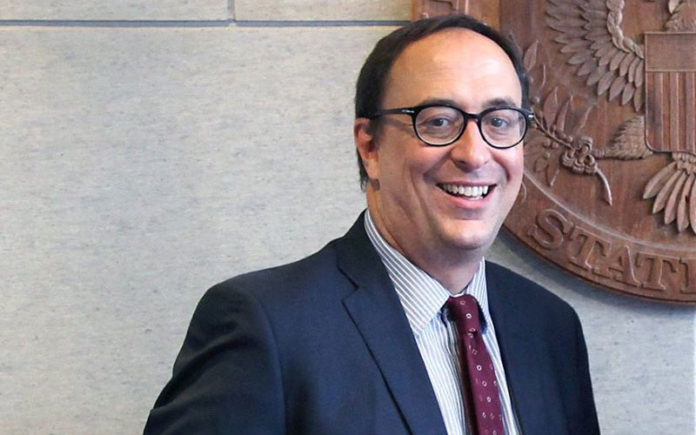 The U.S. Senate has confirmed the nomination of Robert Gilchrist as the U.S. ambassador to Lithuania.

Gilchrist is at least the fifth openly gay person to serve in an ambassadorial role under the Trump administration.

Although nominated by Donald Trump, Gilchrist has a long record of service to both Democratic and Republican officials.

Currently, director of the operations centre at the State Department, he has been deputy chief of mission — a rank second only to ambassador — at the U.S. embassies in Sweden and Estonia, and the director of Nordic and Baltic affairs in the department’s Bureau of European and Eurasian Affairs, in addition to assignments in many other parts of the world.

He was a foreign policy aide to a Democratic congressman, William Delahunt of Massachusetts, in 2002 and 2003.

For several years he was president of Gays and Lesbians in Foreign Affairs Agencies, an organization of LGBTQ people and allies working in foreign affairs for the U.S. government.

He opened Baltic Pride in Tallinn, Estonia, in 2011, with a speech saying, “My name is Robert Gilchrist and I am the number two — the deputy chief of mission — at the U.S. Embassy. I am also gay. So being here this evening is not just important to me as a U.S. diplomat in reaffirming my government’s respect for the integrity of every human being. It is also important to me as someone who has been active in the gay movement back in my own country and as a fellow gay person who is out and proud.”

In the speech, he also praised then-President Barack Obama and Secretary of State Hillary Clinton. Baltic Pride rotates between the Baltic nations of Estonia, Latvia, and Lithuania, all former Soviet republics.

The nation has no legal recognition for same-sex couples and has a law similar to Russia’s “gay propaganda” ban. It does have a law prohibiting discrimination based on sexual orientation, but it is reportedly poorly enforced.