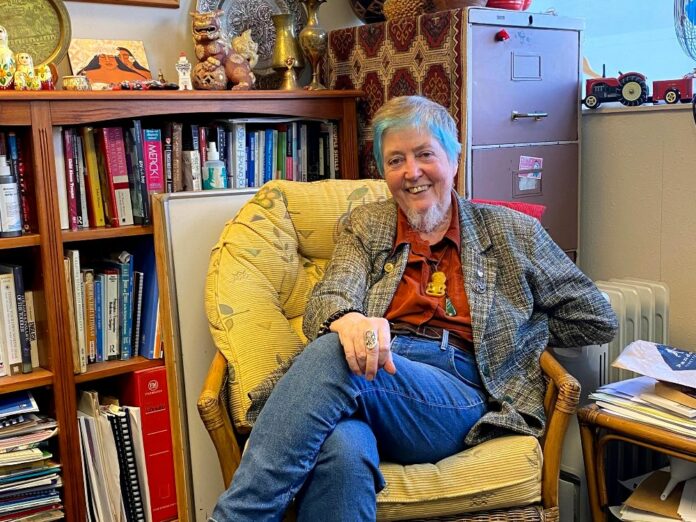 Fraser Shaw & Richard Tait sit down with Mani Mitchell to talk about their life, their work and their hopes for the community.

It’s a long way from growing up on a remote rural sheep and cattle farm in central North Island to becoming a trailblazer for intersex rights, education and advocacy. But Mani Mitchell did just that. In 1997, they founded ITANZ (Intersex Trust Aotearoa New Zealand), a world first. They have also been the subject of publicly funded documentaries, Yellow for Hermaphrodite (2003) and Intersexion (2012).

In this year’s Queen’s Birthday Honours, they were made a Member of the New Zealand Order of Merit (MNZM) for their services to intersex advocacy and education.

I grew up in a tiny rural valley called Kirikau, down from Taumarunui on the Whanganui River. It was very beautiful and idyllic, listening to the birdsong of Kiwi in the bush. It was a very conservative, yet tight-knit community, as rural communities often are. There was a sense of acceptance, even if things weren’t often talked about openly.

Where did you first hear the term ‘intersex’?

Growing up as an intersex child, the issue was never talked about to me. In a medical setting, the conversations were always between the medical staff and my parents, a sign of the era. It was all very underground and secretive. The first time I heard anything, I would have been in my early 20s. I was trying to work out some of the obscure childhood memories I had as a child. Asking my mother about them, she recalled the story of my birth. When I was born, the nurse yelled out “Oh my God, it’s a hermaphrodite!” Mum quickly changed the subject, seemingly not able to cope. So, it wasn’t till both my parents passed away that I sought out more information. I was referred to the wonderful and queer-positive Dr Hetty Rodenburg by a friend, who carried out a physical exam and obtained copies of medical textbooks from the hospital. It was from those where I first learned the word ‘intersex’. I was 40 years old.

What did it mean to you to find a label that you identify with?

Rather than labels, I think the human task is to work out who you are. It’s been a glorious unfolding. Reaching a place where I am very comfortable about who I am (a non-binary, queer intersex person). I realise at the moment it’s not a place that’s legally described, and that’s OK with me. But it should be the right of every human being on Earth, to be themselves, whatever that is.

What have we learned about intersex since then and have things changed in how the medical profession treats intersex children?

Intersex is natural diversity, existing in humans, plants and animals. It’s really important to understand people who are intersex are spread right across the gender and sexual orientation continuum. The statistics are poor, but we believe most intersex people are cis-heterosexual.

The consensus now is that unless there is life-saving reasons at birth for surgical interference, all we need is love and support from our parents until we reach our teenage years, when we can make our own informed decisions about what we want for our bodies.

Our health services are changing, but there is still a binary understanding of sex and gender, and an unconscious bias around homosexuality. I’m excited that our Government has committed to significantly raising the profile, talk of including intersex under the human rights framework and giving us legal visibility and protection. Also, there needs to be a lot more support for parents of intersex children.

You attended the world’s first intersex retreat in California in 1996. What was the experience like and what did it mean to you?

I was terrified, but having never met another intersex person, also desperate. It was joyously transformative. The people that I met are still very important friends.

What inspired you to begin the Intersex Trust Aotearoa (ITANZ) and which of your achievements are you most proud of?

It came from my own personal journey. I didn’t want anyone else to go through what my family and I went through. When I started ITANZ, it was just me and a bunch of wonderful supportive allies, but now we have other intersex people on the Board, building a resilient, colourful, proud, fun-loving community here and around the world. I’m also proud of the intersex flag, partly inspired by my story in the 2003 documentary ‘Yellow for Hermaphrodites’. The yellow background represents being proud of who we are, with the purple circle reflecting that there is nothing wrong with us, we are perfect as we are.

Your documentary Intersexion is used as a training resource by the United Nations. How did that come about?

I’m very proud of that. The documentary has been shown all over the world at film festivals and through my work at ILGA, someone reached out. It was always an agreement with the producers that there would be no charge for using the documentary as a training and educational resource, so now it’s also used in universities all over the world.

How significant do you think you receiving the MNZM is for the community?

It’s been a big thing. When they reached out to me a number of months ago, I hesitated because of the whole colonial aspect of medals and awards. So, I sat and thought about it for a period of time. While I didn’t know who nominated me, I know the amount of work that goes into the process. And I thought about the value of giving attention to the intersex issue.  So, I agreed to have the nomination go forward. But what I had not expected was the impact it would have on our community, particularly our youth. I’ve received messages from around the world and been reminded of the role those of us who are visible and ‘out’ do play for those who are going through the coming out process. When I came out 25 years ago, there were no other visible intersex people.

We’ve come a long way with LGBTQI+ rights, but there’s still a long way to go. Why do you think we struggle with that acceptance in NZ?

In terms of our society, while middle-New Zealand is accepting and generous, we’re now living in a very polarising time. On one side of the pendulum, we are tackling lots of issues, like colonisation, racism, equity, human rights and more. But on the other side, there are very regressive attitudes and hostility towards the community. Hostility has been expanding, ignited from ignorance and fear.

What impact do you think some of those attitudes have on our community?

As a therapist and counsellor, I see the impact that has on our community. It has taken people’s lives. If you have fragile mental health and see some of the hate on social media, that has an impact.

What as a community can we do to support our youngsters?

We need to go back to the importance of community-based groups and making sure those groups get Government funding so they can do the work. It’s also been extraordinary to see our Pride celebrations diversify from a single celebration to month-long festivals, with everything from cake-making competitions, poetry readings to bush walks. It’s a wonderful way to celebrate our creative community.

To sum up, any final remarks for Express readers?

If you’re an ally, do your work and understand the complexity and diversity of this community. We’re a small community, so we value your support. If you’re an intersex person, you have nothing to be ashamed of. If you’re a parent, your child is amazing and beautiful. If you’d like to talk to us, please reach out.