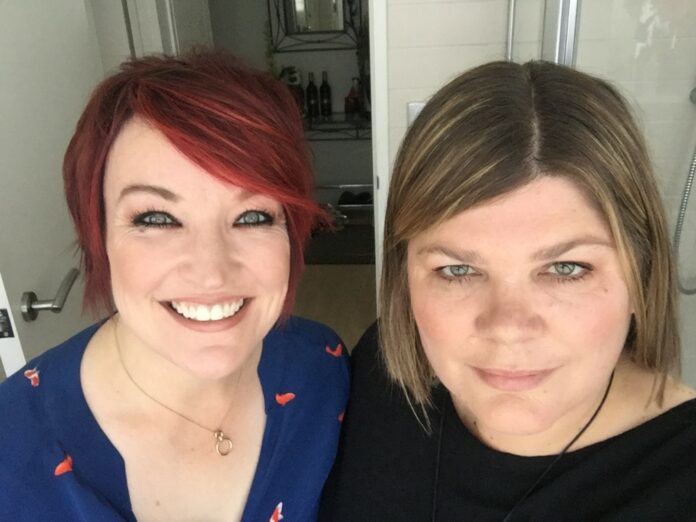 After working their way up through the music and media industries, Nicole Thomas and Paula Yeoman decided to step out on their own and create music management and PR company NicNak. They tell us about backing the underdog and representing talented women and non-binary people in the notoriously tough music industry.

How do you identify yourselves?

Nicole: I am a proud lesbian. But it took a long time for me to come out. I was 27. Prior to that, I battled with it but also didn’t realise being gay was even an option. I was from a small regional Australian town and didn’t know any lesbians at all.
Once I came out, I finally felt whole. I was proud and passionate and not scared anymore. That has stayed with me. And I don’t understand why anyone has issues with people they perceive as “different” to them… We have come a long way, but we still have a long way to go.

Paula: I have always personally steered clear of labels – although others around me have always been quick to affix them to me. That’s not to say I don’t understand and respect the need for them. I also have immense respect for those who have fought hard for rights. I have always wanted people just to accept me for who I am. That may be a naïve way of seeing the world… There was no big coming-out party or speech. I just turned up home after living in the UK, with a girlfriend. I gave no one the opportunity to question or discuss it.

How does your orientation and identity influence you and your work?

Nicole: I love women. We are the underdog and it is not an even playing field. It should be, but it isn’t. Every day we fight to be seen. Not just in the music industry, where politics and prejudice around females and sexuality are rife, but in society in general.
We have to fight continuously for our place at the table. Not just us, but other minorities as well. The world is white cis male-dominated and things need to change.
Paula and I manage four female artists and we represent a large number of females with our publicity company. We will continue to fight to be visible and fight for our rights in all that we do. We don’t give up.

Paula: I’m a fighter, for sure. And I guess that comes from having spent my entire adult working life in two of the most notoriously brutal industries there are – media and music. I’m used to being underestimated because of my gender and my sexual orientation. But I kind of like that, because it means I can just put my head down and get on with s***. It also means, there’s one hell of a sting in my tail when I do make a move. So in short, it’s made me a fighter… I fight fiercely for the underdog and one of the things I love most about NicNak is representing the artists on our management roster. Being a young female-identifying and queer and non-white person in the music industry is a tough slog and for me, it’s personal. I won’t rest until these artists are shown the respect and recognition they’re due.

How do we create safe queer spaces?

Nicole: Safe queer spaces are created when the intention comes with love and kindness. A long-running concern with queer spaces, in general, is they just haven’t been safe – they’re often tied to late nights and drug and alcohol consumption. I worry about our night scene. 10-15 years ago, we used to have regular female-focused club nights with Flirt and Candy Bar. These were great for us at the time as we could be in a space with other lesbians and not have to worry about being hit on by men or being abused. But those clubs and nights don’t exist anymore.

Paula: I think there is a new generation of young creatives, entrepreneurs, and visionaries, who are kicking ass and making it their mission to create safer queer spaces. So, I think it’s time for the old guard to stop, listen and learn from them. And if they’re not prepared to do that, then step aside.

What are some challenges you think are facing New Zealand’s LGBTQ+ community?

Nicole: I feel the community is quite divided. This can be seen by the two pride marches running in conflict with each other and the overall “us vs them” mindset that carries through a lot of the conversations and activism in the community. People are not being treated with respect by others. I feel like internal politics threatens the overall community and the greater good of what we should be standing for.

Paula: I think it’s good to have different views and goals because the LGBTQ+ community is as vast and varied as any community. But it’s also a small community, and to move forward, there does need to be an element of a shared vision, while also accepting the differences within that.

What is one thing we could do to improve New Zealand’s LGBTQ+ community?

Nicole: I would love for everyone to love each other. Have compassion for each other and not project set rules onto anyone. The prejudice we feel from the external community, we currently have similar prejudices within the community as well… you can’t win! I would love for all the prejudice to be gone and for all of us – all humans – to live together with compassion. No rules. No attachment. Just being with each other without aggression.

Paula: Listen and learn from others who don’t necessarily think and feel the way you do. I honestly think it’s young people who hold the answers. Yes, it’s important to acknowledge the wisdom of those who have paved the way, but we need both.

NicNak has just been nominated for ‘Manager of the Year’ at the Aotearoa Music Awards! For more information about NicNak visit nicnakmedia.com