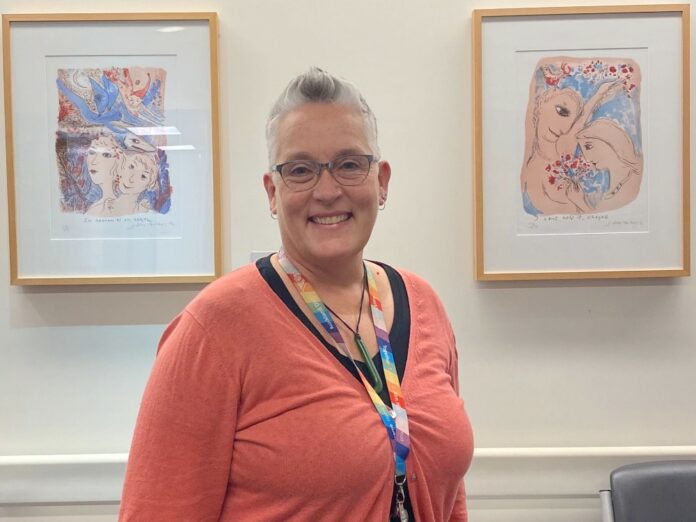 Beatle Treadwell is the Associate Director of Midwifery – Māori Health and Equity for Auckland District Health Board (ADHB). She tells Oliver Hall about her 30-year career, being a frontline worker during the pandemic and coming out at work in the 90s.

Beatle Treadwell began her three-year training to become a midwife in 1992. Unsurprisingly over that 30 years, she has never experienced anything like the Covid pandemic that has shaken our health system since 2020.

“The most stressful thing was looking after my team and the women that they looked after,” Beatle tells us.

“Priorities became different. I had to make sure there was enough PPE in the ward for everybody – all the time! During that last peak of Omicron, my ward got shifted to another area, and the physical space that I was managing before, became a maternity COVID ward. So I was managing both those areas for a little while, and that was stressful,” she explains.

They say in the hardest of times, you find out who people really are, and Beatle tells us she was blown away by her colleagues and staff.

“They just went, ‘yep, that’s fine. I’ll go and work there if I need to’,” she tells us, adding that she can’t believe how lucky the health service has been.

Despite this success, pandemic times have been hard for frontline workers. During Lockdowns, women giving birth were only allowed to have one support person with them when they went into labour. Once they had given birth and were transferred to the ward, that support person had to leave. “There were some really tough times for the staff, who had a number of security calls that we had to make because people refused to leave,” she tells us.

When asked how these stressful times impacted her life outside of work, Beatle immediately reflects on her commute to work from Waiheke Island.

“I spent two years on that ferry being furious with people not wearing masks. I even got some business cards printed saying, ‘wear your mask. There are lots of people who will work at the hospital on this ferry’, but I never actually gave any out! It just helped me deal with the internal battle that I had going on,” she explains, adding, “It felt like a slap in the face, to those of us who are going to the hospital every day, putting ourselves at risk, that these people felt so entitled to their facial freedom.”

Choosing midwifery as a career is something Beatle refers to as ‘a calling’ since she was a teenager.

“I related to the concept of being with women – that’s what the word midwife means. I’ve always seen it as walking alongside women and their journey to becoming a parent. My oldest niece was born when I was 18 and having her at home just gave me such a rush! Newborns are so pure, so flawless; when I first saw her breastfeeding, I knew that’s what I wanted to help people do.”

In the mid-nineties, most workplaces could be challenging places to be open about your sexuality if you were anything but straight.

In 95, Beatle’s partner became pregnant with their first child while Beatle was in her first year out of midwifery school.

“I was working in the labour and birthing suite when he was born. It was really difficult for me to let other people know that my partner was having a baby. For a lot of the pregnancy, I just said, ‘the woman I lived with is having a baby.’”

After their son was born, Beatle decided she had to stop pretending, theorising that if she couldn’t cope with the reactions of others, how would her son ever be able to.

Beatle went to work as a Lead Maternity Care (LMC, midwives who are not based in a hospital and on call 24 hours) on Waiheke. “During that time, I remember getting some negative responses when somebody rang my answerphone and the message made it obvious that I had a female partner. That was in 2002, but by the time I stopped practising on Waiheke in 2013, there was a community gathering for me. It was really beautiful.”

That year Beatle joined the central offices of Auckland DHB, where she says her sexuality has, “been absolutely celebrated. Auckland DHB, particularly, has the philosophy of bringing your whole self to work. There’s no fear of being who I am at work. It’s a very supportive, welcoming environment. And I’ve got my new role, I think, partially because I am a lesbian.”

That role, Associate Director for Midwifery, aims to improve equity for Māori, Pasifika and other marginalized groups, who can suffer health and well-being disparities. This includes trans men and gender-diverse people who may want to give birth. Beatle tells us there are a number of Auckland’s LMC midwives who particularly want to provide safe care to those communities, helping to ensure pregnant people across the spectrum are all well cared for.

Beatle tells us she would recommend a career in midwifery or within the health system in general, to people from our queer communities.

“If you’re drawn to it, it’s an amazing career… my experience has been that there can be unfriendly people everywhere. But I think that, particularly in women’s health, we’re pretty good. I can’t speak for other areas, but the overarching philosophy of the DHB is welcoming.”