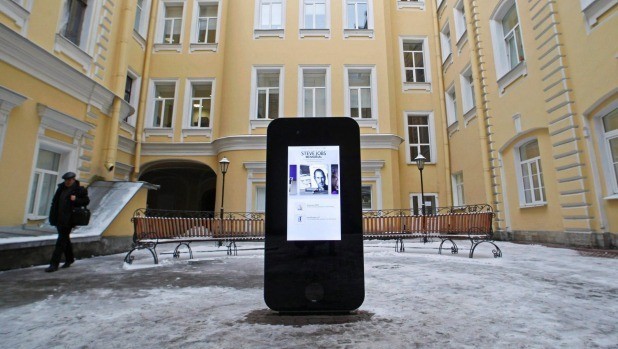 Citing the need to abide by a law combating “gay propaganda,” a memorial to Apple founder Steve Jobs has been dismantled in the Russian city of St Petersburg after he successor as CEO, Tim Cook, came out as gay.

The memorial to Steve Jobs was constructed by a group of Russian companies called ZEFS.

“In Russia, gay propaganda and other sexual perversions among minors are prohibited by law,” ZEFS said, noting that the memorial had been “in an area of direct access for young students and scholars”.

The law ZEPS referred to was passed by President Vladimir Putin last year which prohibited the spread of “gay propaganda” among minors.

Citing “traditonal values” when  signing the anti “gay propaganda” bill into law, Putin said there was no discrimination against gay people in Russia and the law was needed only to protect young people, something disputed by members of the gay community who say its passage has increased problems for them.

“After Apple CEO Tim Cook publicly called for sodomy, the monument was taken down to abide to the Russian federal law protecting children from information promoting denial of traditional family values.” ZEPS says.