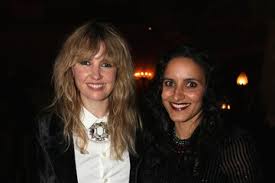 Kiwi singer Ladyhawke and actress Madeleine Sami are set to marry in Masterton this weekend.

The NZ Herald reports that the pair will exchange vows in front of a crowd of around 200 people in Masterton this weekend.

A source, who did not want to be named, told the  NZ Herald it would be a big day for the couple.

“There’ll be over 200 people there. It’s going to be quite big and lots of celebs.”

The pair have previously been very private about the relationship, but it is believed the two share a home togther in Los Angeles.

Ladyhawke is a best known for her songs My Delirium and Paris is Burning, while actress Sami grew up in Auckland and has had roles in Sione’s Wedding and Outrageous Fortune.