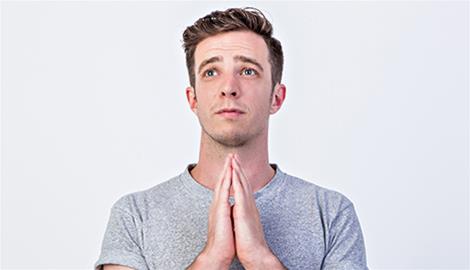 We get to know the community comedians who’ll be splitting some sides at the up and coming International Comedy Festival. Today it’s buff comedic hottie Eli Matthewson!

I read this on twitter today, apparently from a school student’s poem: “Any machine can be a smoke machine if you use it wrong enough”

My Comedy Festival show is called “Faith”. It’s about growing up religious and what happens when you don’t believe anymore. Once you don’t have faith in god what can you have faith in anymore – can we even have faith in Beyonce post the ‘elevator incident’? There’s also jokes about Grindr, Kebabs, my eighth Subcard anniversary and so much more!

I have a theory about why god made gay people that I think could change the world. But I’m only telling it to people who buy tickets to my show cause I’m a big tease.

The filthiest joke in the show right now is about holding hands. But don’t worry, it’s dirty 😉

I’d put my keys in a little pouch and keep them in there, cause I lose them at least once a day. What a question!

Look, I am a terrible cook. I’d order everyone TV dinners from Ripe and we’d all watch X Factor. Sad but very true.

I never get another letter from the IRD again.