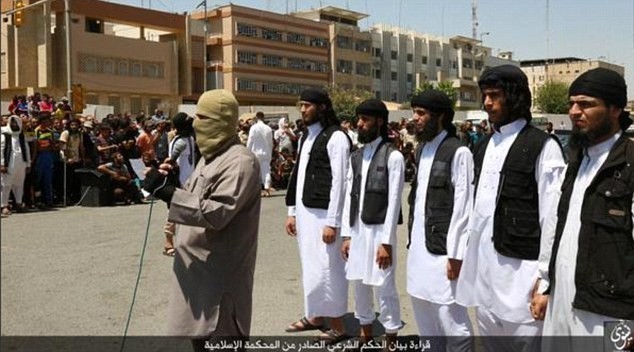 Shocking new images have emerged of an Iraqi man being brutally executed by Islamic State for being gay.

Islamic State is continuing its campaign against those accused of homosexuality with new photos showing the horrific punishment inflicted on its victims the Daily Mail reports.

It is unclear how the man’s sexuality was discovered but the jihadi group new photos show how the militants continue to kill gay men by throwing them off buildings.

The images show a large crowd of men gathered in Mosul waiting for the horrific punishment to be carried out.

Four ISIS militants dressed in white robes and black tactical vests, stand in a line as a judge reads out the statement condemning the man to his death as a punishment for his alleged homosexuality.

In this case, ISIS have not published photos of the moment the man is pushed off the building, instead releasing the image of the man’s motionless body on the hard tarmac.