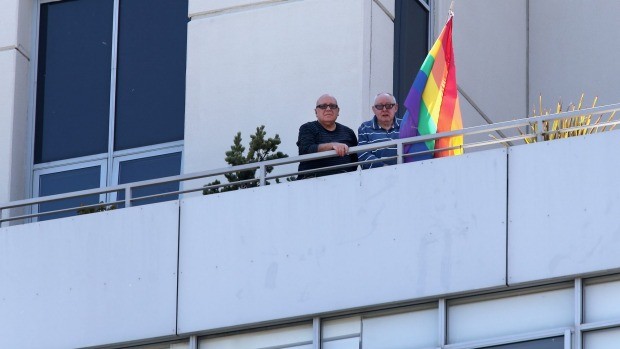 An elderly couple in Melbourne have been ordered to remove a gay pride flag from their balcony or risk legal action.

Murray Sheldrick, 78, and his partner James Bellia, 72 told The Age they received a “nasty” letter from their Body Corporate demanding that the couple remove the flag from their balcony, or risk a legal case in the Victorian Civil and Administrative Tribunal.

They have since complied with the demand and removed it from their balcony.

The flag was described as “displaying advertising material” and the residents were instructed to remove the flag immediately.

Mr Bellia told The Age, that the couple, who have been in a relationship for 50 years, and own their property, bought the flag in February  and only flew it from their balcony during special occasions.
The couple say they believe the demand to remove the flag is being fueled by homophobia. They said their flag had nothing to do with advertising, as the body corporation suggested, nor was it obstructing someone’s view.

“We are positive it is homophobia, there is no doubt about it. Why else would they bother us? The flag is on a huge terrace, it’s not in anyone’s view.”