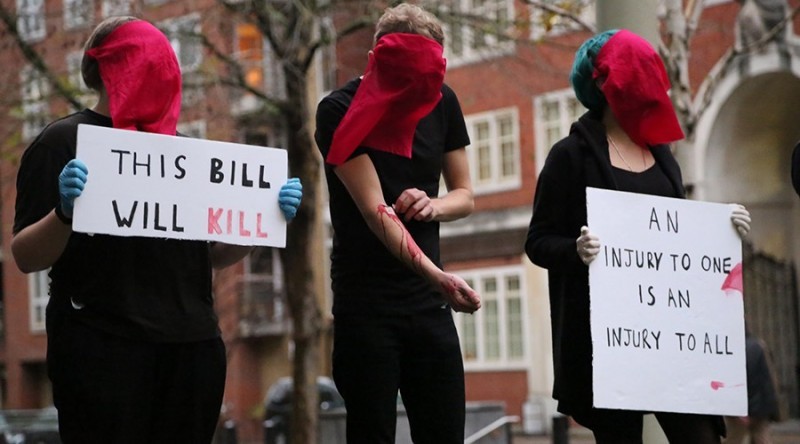 GLBT activists in London have a staged a graphic demonstration to protest against an immigration bill they say will increase discrimination and target vulnerable people on the brink of poverty.

With masks covering their faces, activists from Lesbians and Gays support the Migrants (LGSM) stood in front of the Home Office and made small cuts in their arms in an act meant to symbolise a “river of blood,” in reference to the famous anti-immigration speech by Enoch Powell in 1968.

The proposed bill will introduce strict new measures for individuals attempting to seek asylum or work in the UK.
Landlords will be legally obliged to check the documents of their tenants and  sanctions would be placed on illegal workers and rogue employers.

LGSM says the bill aims to create a “hostile environment” for illegal immigrants that could “prove deadly.”

“We created ‘rivers of blood’ to show that the real river of blood flows from the Home Office. Our society is becoming divided, not by diversity, but by our government forcing ordinary people to become border guards,” an LGSM activist told media.

A fellow activist said it is the politicians who will have “blood on their hands.”

The UK bill is in line with similar proposals being considered by other European countries in the wake of the Syrian refugee crisis.