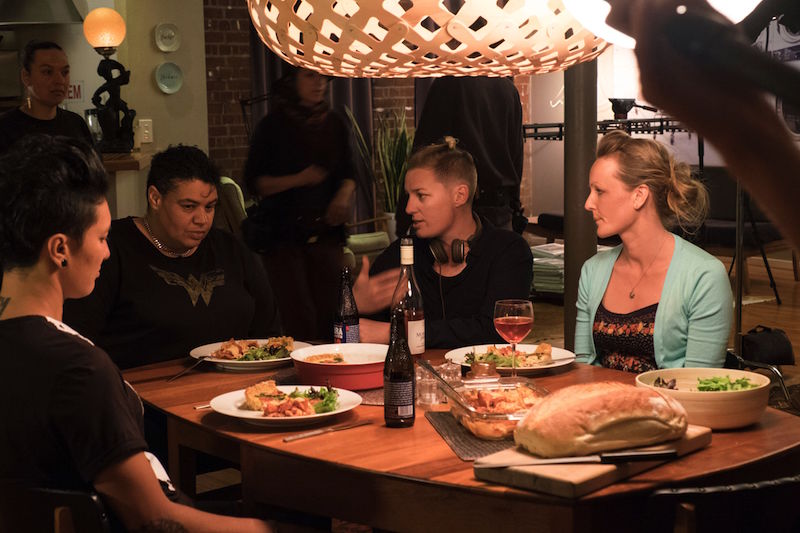 The first locally produced lesbian drama has been launched online.

Pot Luck is a new local production that explores the lives of three Wellington friends when they make a pact which turns their weekly pot luck dinners into a search for love.

In order to produce more episodes, the show has launched a boosted page to fundraise to cover the costs of production.

Set in Wellington, the storyline revolves around the friendship of Mel, Debs and Beth. Mel, played by Nikki Si’ulepa, is charismatic, free and easy. Her mate Debs (Anji Kreft), is a shy butch whose heart was broken six years ago, so there’s a softer, complex side to this staunch woman. Beth, (Tess Jamieson-Karaha), is the third part of the trio, she’s also Mel’s ex-girlfriend. The weekly dinner format allows for a range of guest characters, and Beth’s mother Eileen (Kate Ward) will also make a regular appearance.

Ness Simons, the writer and director, is a graduate of the NZ Film School and Whitirea‘s Creative Writing Programme.

Simons said the series was inspired “by many enjoyable nights I’ve had sharing pot luck dinners with my friends.”

She adds, “There’s so much scope for story when you bring a group of women together, so it seemed like a good idea to build a series around friendship and food and the different dynamics around the table.”

You can view the first episode below: