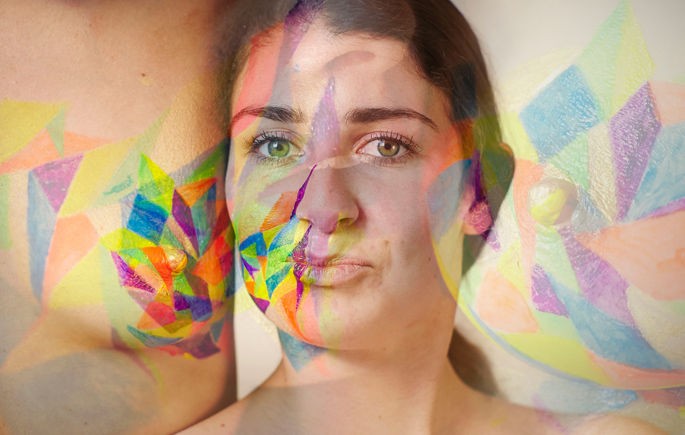 ‘The Offensive Nipple Show’ at the Basement Theatre is a loud, bold and irreverent romp which plays around with issues of body sovereignty, gender and feminism in a fun way. The show is made up of a number of short skits which seem to be improvised and involves a lot of audience participation that I wish I had been warned about! Bates and Tuck consistently seek to subvert and challenge how we perceive our bodies and women’s bodies in particular.

The fact that both actresses are partially undressed or naked for most of the show is significant but not the main point. It is how they use their bodies and play around with common conceptions of women’s bodies being sexualized that is actually more interesting. Some of the scenes work really well like their take on burlesque using a pair of huge life size breasts or when they make their vaginas ‘talk’ and take on characters of their own.

Another moment that stood out to me was when Tuck talked directly to the audience about being in a relationship with another woman and the conversational style was engaging and relatable. However, most of the show tends to drag on a bit too long. For example they seem to run around pretending their breasts are guns and shooting at each other and the audience for a very long time. There are also some more scenes which do not quite pack a punch or that are just confusing. For me it is a bad sign when the audience cannot tell if the show has ended or not.

Overall, I would recommend The Offensive Nipple Show to anyone who wants a fun night out with a bit of feminist politics thrown in.