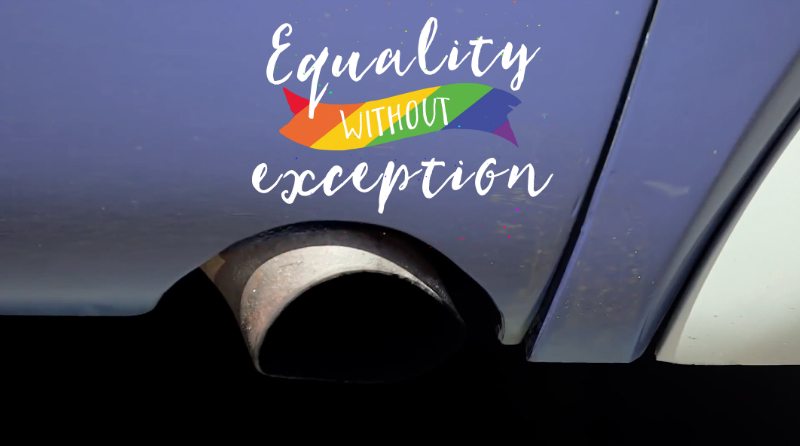 Three young people are calling for New Zealanders to rally against transphobia in the media following a string of offensive campaigns from Kiwi companies.

The group are rallying against Auckland Transport and Air New Zealand who recently released an advertisement and a safety video which impose the idea that transgender women are men who dress up as women. Auckland Transport’s advertisement was a part of a campaign targeting students called “Too Young to get Hitched”. Different forms of transport are used a metaphor for dating. During a section dedicated to using the bus, the subject says: “but then I realised, she was a he” as the camera closes in on the bus’ exhaust pipe. This delivers the message that having a penis makes you a man – an idea that transpeople, agender and gender diverse people have been fighting against.

Air New Zealand’s safety video featured Rhys Darby dressed in traditionally feminine clothing which seems to not only poke fun at transpeople but also deliver a message that transgender women are a source of comedy.

You can view footage of these campaigns here and here (Trigger Warning: Transphobia).

An event Facebook page as been created by the group to call New Zealand into action against transphobia. The Facebook event comments that “Auckland Transport has described their campaign as ‘edgy’ as ‘…this campaign targets tertiary students, who are difficult to engage…’ when confronted about its transphobic content, but said ‘at this point we are not aware of any other complaints in relation to the content; on that basis we will not be reviewing the campaign.”  They also report that they are yet to receive a response from Air New Zealand regarding complaints made.

Co-organizer Jessica Alouette spoke to express about the importance of working against transphobic campaigns in the media.

“The intent of our campaign is to send a strong message: that transphobia is not welcome in our media in 2016. But more than that, we want to use our platform to educate about transphobia, and to prevent young trans people from being subject to abuse through our media in the future. So far, we’ve given resources giving AT a view on the facts about trans people, in an effort to dispel the myths that their campaigns perpetuate and encourage them to learn from their mistakes. Trans women live, work, and exist fully as women, and trans men live, work, and exist fully as men; AT’s campaign leaned on the myth that trans women try to trap men, and AirNZ attempts to lampoon trans women as men in dresses.

Trans people are in the spotlight now more than ever before, and educating people about us, and appropriate ways to engage with us, is a vital effort. I’m proud to be a part of that and to stand firm against transphobia in our media.”

More information about the movement can be found on the Facebook page, including the plan of action put in place to make sure these two kiwi institutions can understand the hurt caused by their transphobic campaigns.

9am – Release AT contact information, commence action and promotion of action on our personal social channels.

5pm – Conclude promotion of action against AT.

9am – Release AirNZ contact information, commence action and promotion of action on our personal social channels.