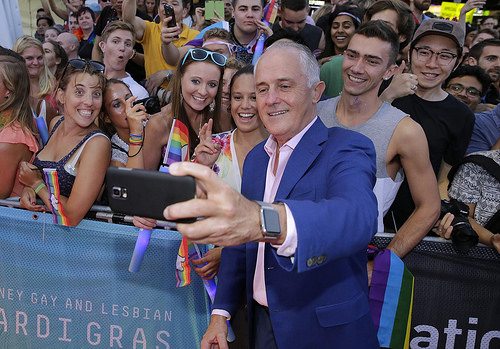 Prime Minister Malcolm Turnbull will not be invited to attend Mardi Gras as an official guest after a motion moved at Saturday’s Sydney Gay and Lesbian Mardi Gras AGM was passed.

The motion was brought forward by Patrick Wright and Cat Rose of the activist group Community Action Against Homophobia, and it sparked a passionate back-and-forth debate between members.

The original wording of the motion was “the AGM of the Sydney Gay and Lesbian Mardi Gras does not believe that the Prime Minister who denies our equality should be welcome at our parade”, and asked the board to issue a public statement.

One member proposed an amendment to the motion so that it would explicitly state that Turnbull would not be invited in an official capacity, rather than suggest he was unwelcome to attend the parade at all. This amendment was accepted by the CAAH representatives.

Paul Savage proposed an amendment that would see no politicians invited in an official capacity, and GetUp’s Sally Rugg suggested that amendment be changed to an individual motion, which it then was.

CAAH’s Patrick Wright disagreed with that suggestion, saying that the Greens’ Richard di Natale and Labor’s Bill Shorten have not allowed homophobic attacks to continue unchallenged the way Turnbull has.

Board candidate Jesse Matheson spoke against the motion, saying that members “shouldn’t be the gatekeepers of invitations” and reminding the room of the organisation’s commitment to inclusivity.

Current board member and candidate James Brechney spoke in favour of the motion. Brechney was recently censured by his fellow board members for saying “I don’t think we want Malcolm Turnbull at the parade”. His stance on this caught the attention of CAAH activists, who have been supporting his campaign for board reelection.

Brechney had the support of 48 proxies – that is, members who support the motion but could not attend the meeting – which helped ensure its success.

In addition to not inviting Turnbull as an official guest, the organisation will issue a public statement explaining why.

The final round of voting for the Mardi Gras board elections also took place at the meeting, with results expected to be announced on Monday.