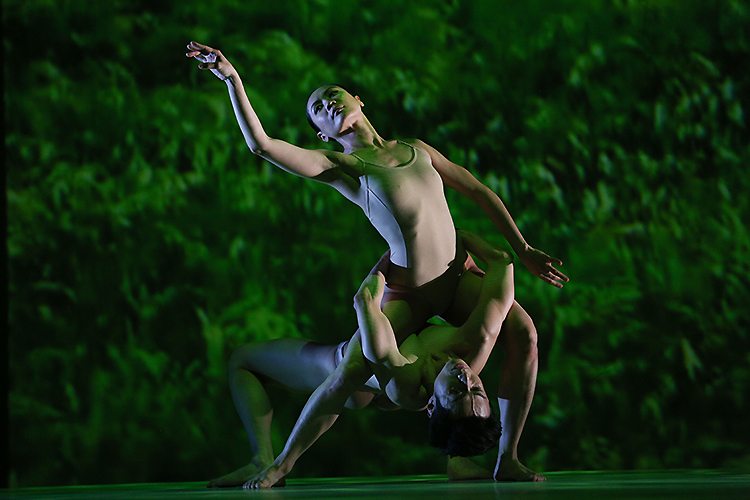 Rice is all about the struggle. Heavy, belaboured movements that are punctuated with audible breaths and stomps play a large role in the 70-minute dance about the life cycle of rice.

In a sense, the dance is a tribute to the farmers who do the backbreaking work to produce the staple of a Chinese diet, as well as an offering of gratitude to the crop itself.

Before Rice, Lin Hwai-Min choreographed two other dances inspired by the grain. It harks back to his childhood, where he grew up playing in rice fields. It is the Chinese identity that he holds close, and also what influences his dance company, the Cloud Gate Dance Theatre.

What is interesting about the company is that it blends modern dance with Asian martial arts. As part of their practice, the dancers do Qigong, which literally means ‘breath work’ in Mandarin; the incorporation of it into the dance not only provide a beat that is sometimes lost in the soundtrack – parts of the dance are utterly silent except for the dancers’ audible breaths – but also references how both breath and rice are essential to (Asian) life.

There is a concept in Tai Chi that refers to drawing curves with the body. We experience this through the dancers’ restrained movements and the acrobatic leaps – not so much of the gravity-defying type, but rather those which create levels of bodies, reminiscent of the varying heights of plants waving in the wind.

Some critics have said that Rice is far too full of stoic and lead-like scenes. Sure, some of them do stretch for what seems like aeons, but I think an argument could be made that they do not stretch for long enough to properly represent the effort and sacrifice that goes into farming rice. Yet, the many Asians in the crowd enjoyed it – I heard snippets of Hong Kong Cantonese, multiple Mandarin accents, and spied a few monks as well when entering the ASB Theatre – with applause lasting several minutes after the performance ended.

Is this a show that is accessible to everyone then? Probably not. Though if you have even a modicum of appreciation for modern dance or martial arts, Rice is an amalgamation of the two that will make you go “wow”.