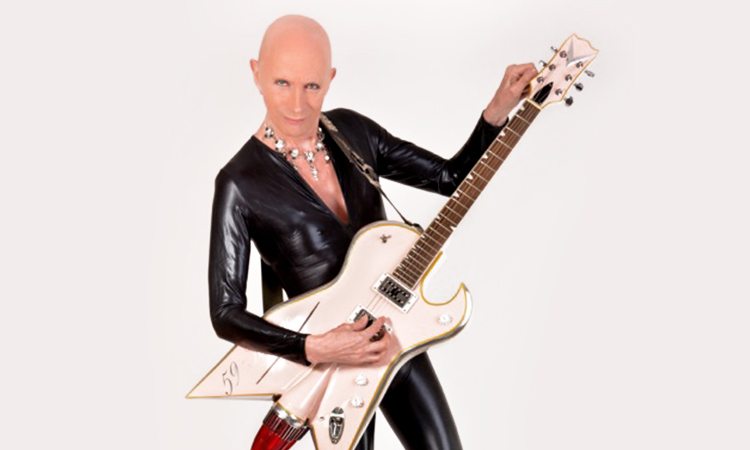 One can’t help but envy Richard O’Brien, a man that not only lived through London’s gritty glory days of the ’60s and ’70s, but in part, created them with his explosive, addictive stage production, musical, and then movie, the iconic cult classic, The Rocky Horror Show. It evokes a time of black and white nostalgia, of late nights blending into misty mornings, one of cigarettes, drugs and alcohol, fluid love, of weaving conversation and the abundant celebration of pop culture.

It’s a lifestyle that cost some. But not O’Brien, who this March celebrates his 75th birthday with his 75 Years of Frock N Roll show at Baycourt Addison Theatre in Tauranga, a fundraiser for Starship Hospital.

As for making it to his three-quarters of a century milestone, O’Brien is justly wry.

“I’m amazed that I have managed to reach this age with a lifestyle that has been, shall we say, as dissolute as mine. I have always argued that ‘short and happy, beats long and boring’ but now it appears that I get ‘long and happy’ and that is remarkable.”

During his one-off show, O’Brien will take his place on a couch while pseudo psychiatrist for the night, longtime friend Mark Sainsbury, will strive to unpick his marvellous mind. “Expect surprises!”, says the fiercely witty O’Brien.

“I’m looking forward to sharing some laughter with Mark and the audience, singing some songs with first class musicians, and the adorable Craig McLachlan.”

He adds that the choice of Starship Hospital as a recipient, one which O’Brien has supported many times over, was easy.

“A cardinal rule is that children shouldn’t die before their parents,” he says. “All nations should fully guarantee the protection and safety of their infants and youth.”

Following what is expected to be an enlightening and entertaining evening, O’Brien will celebrate the day of his birthday, on Saturday, surrounded by his nearest and dearest, alongside wife Sabrina Graf.

“We will have guests for a luncheon, the main course being a seven hour, slow-roast leg of lamb. Wine will be consumed in the manner of pagan emperors.”
While even O’Brien was surprised at how much the transsexual story became the most significant hook of Rocky Horror, from a young age, he recognised his own gender fluidity.

“I knew at the age of six that I would have preferred to be a girl. It wasn’t something that I could share with anyone and, consequently, I have lived most of my life in my head,” says O’Brien.

“Luckily, because I am deeply loved by my family and darling wife, I can be open and truly ‘out’ in a manner not afforded to everyone.”

And while gender choice has widened to a pool of more than 60 options depending on what city you’re in, or form you’re completing, O’Brien warns of the dangers of being complacent in a rapidly changing world.

“It is imperative that we don’t allow homophobia to re-enter our political and social landscape,” he says.

Of his career, O’Brien succinctly answers “NO” when asked whether he’d ever imagined that The Rocky Horror Show would reach its extraordinary status as a cult classic, even more than 40 years later. As his acting life ebbed, his writing career flourished.

“I stopped pushing forward as an actor and spent more time writing. I can honestly say that, at no stage did I wish to be rich or famous, I just wanted to doing those things that gave both pleasure and a sense of fulfilment.”

A career highlight, says O’Brien, was embracing the role of game show host on British television, which he enjoyed because “the games were fun and the production company first-class”.

O’Brien, quite simply, is one of Hamilton’s most treasured adopted sons – having spent six years living there working as a barber – cemented, so to speak, by the city installing a Riff Raff bronze sculpture in his honour. And the affection is mutual.

“To become a bronze erection is humbling. For it to stand on the very spot where I used to cut hair and day dream is astonishing. I have known this city for sixty-five years and have witnessed it change from a cow cocky town to a muscular modern city attempting keep up with a rapidly changing world.”

And to people out there dreaming of another life or way of being, O’Brien offers words of strength.

“If you are feeling isolated and marginalised, don’t be. You are not alone,” he says. “Choose your friends carefully, and stay safe.”
As for 2017, there’s no rest for O’Brien, with thrills yet to come.

“I have another DNA Detectives series coming out later in the year, and a Viennese director has suggested that a Gore Vidal novel, that he and I worked on thirty years ago, should be resurrected and staged as a mixed media event in Vienna.”

Don your finest threads and celebrate iconic cult star Richard O’Brien as he reaches his three-quarters of a century milestone, on Friday 24 March, 8pm at Baycourt Addison Theatre in Tauranga. Tickets $58 and VIP $78. All proceeds go to Starship Hospital, grab tickets here.