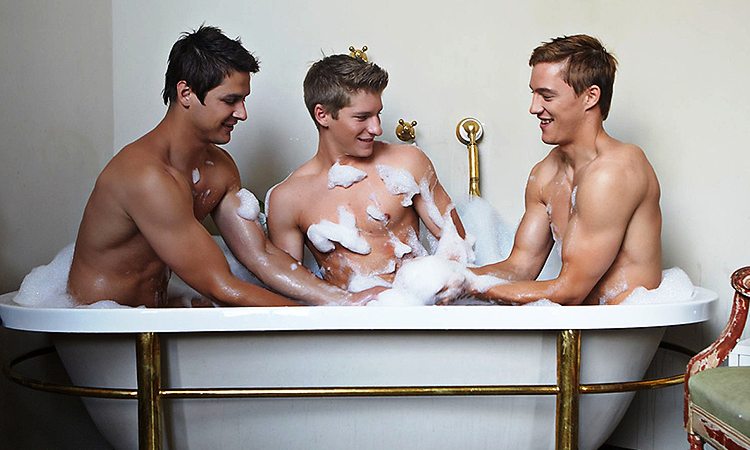 We are told our whole lives that we can hate as many people as we want: whole nations, groups of people, ideologies and races, our bosses, our neighbors: we are allowed to hate freely and abundantly, but we only get to truly love one other person.

When my husband, Alex, and I met Jon, a handsome intellectual with blue eyes and the gait of an old man trapped in a young man’s body: sexy and endearingly awkward all at the same time, it was just supposed to be a hook up in a long line of sexual adventures. But then Jon came back again, and again and again. And then we were making plans to watch movies and eat pizza. We invited Jon to spend the night.

I knew the first time Jon came over and the three of us didn’t have sex that something important was happening: Jon was no longer a trick. We were falling in love. All three of us.

I had no idea what to do. I had no idea what was normal or not normal. I was like a crazy person: madly in love and jealous at the same time: watching Alex, my brilliant artist, my dark-eyed passionate soul mate, the love of my life, falling in love with Jon was torturous and beautiful, watching the two of them kiss and hold hands, sitting on the couch giggling over gifs was almost too much to bear, and yet I couldn’t get enough.

We had terrible fights. Once, while on vacation in Vancouver, I threw myself out of bed, pretending I had fallen. I stormed throughout the one bedroom apartment we had rented , getting dressed, threatening to leave. I even made it to the elevator, where I hesitated for five minutes waiting for someone to come and get me. No one did. In Spokane Washington, on my birthday, we had an eight-hour fight that got so bad Jon ended up booking a separate hotel room. In Seattle a minor annoyance over Bahn Mi sandwiches (they were the only thing I wanted for breakfast every day) turned into relationship negotiations.

Everything was heightened and out of perspective. We were falling in love. We were sharing our new love, Jon, with each other. We were out of minds.

All the books I read said jealousy was wrong, the emotion of the monogamous unenlightened. Something we poly people should transcend.

And yet I wasn’t transcending jealousy. I wasn’t enlightened at all.

Being with one partner is hard enough. I can’t imagine two.

I hated the word poly and what it seemed to mean. I didn’t identify with the new age philosophies attached to a poly lifestyle. I didn’t think I was more enlightened than my monogamous friends. I am a jealous, insecure cave man.

There were moments of true beauty and wonder as well. I am still stunned by those times when I stumbled upon them, lying in bed together, holding hands, kissing, laughing at some passing comment, cuddled on the couch. Moments when the three of us all huddled together before we left the house. A night Alex drove Jon and me through Terminal Island, the industrial lights igniting fires in the sky around us, creating a matrix of magic and wonder and beauty. The three of us holding hands on a hilltop looking over downtown LA, Alex and I face timing with Jon from Berlin: Jon still in bed, his hair disheveled and beautiful. The three of us eating donuts at two am while watching Strangers With Candy. Exploring Granville Island in Vancouver, eating rosemary and salt bagels, taking the ferry back to the mainland, walking endlessly throughout Vancouver and Seattle, Madrid and Paris, Berlin and New York City, the three of us exploring the world together.

We are a family and like all families we have our struggles and our heartache, we strive and toil and trudge the road of life together, doing our best to take care of each other, sometimes failing, sometimes succeeding.

I learned that love is not limited: it is expansive, it grows, it is endless. I can love Alex completely, with everything I have, and still have more than enough to love Jon just as completely, just as fully.

The decision to introduce Jon to our friends and family at our wedding seemed like a pragmatic choice. Everyone would be in one place at the same time. East Coast and West Coast merging. Get married and introduce the world to our boyfriend.

I am lucky. My family are all left wing, about as liberal as you can get. They are tolerant. They try to understand. I’m sure this was not easy for them, but in the end my father said, “Well, as long as you are happy I guess that is all that matters.”

“I imagine it isn’t always easy. Being with one partner is hard enough. I can’t imagine two. Just do your best to take care of each other.”

My father is a wise man.

Our wedding was held at our small Craftsman house in Hollywood. My best friend Amy flew with her family from New York City to officiate. Over a 150 people showed up. Jon stood in the back of the room during the ceremony. When people would introduce themselves to him he would say, “Nice to meet you. I’m Jon, Alex and Jeff’s boyfriend.”

Later Jon told us how stressed out he was. We had all underestimated the timing. The emotions that would come up through out the day.

We seem to do that a lot. Underestimate what is happening until it is over, and we are left thinking: why would we have thought that was a good idea?

But we wanted everyone to see Jon. To know him. We were proud of him. We wanted to show him off.

In time this thing that seemed so far outside the norm, so far outside what was acceptable, began to feel normal. Life began to fill back in. Jobs and goals and the gym, paying the bills: all the ways that normalcy takes over even the most extreme situations.

No longer was there just two of us. We were three. I think that was the hardest part: trying to maintain Alex and me while allowing Jon to be a full third. Eventually I began to see this not just as one relationship but as four completely whole and separate relationships: Jeff and Alex, Jon and Jeff, Alex and Jon, and the three of us. Then there are our relationships to our selves. Carving out time to be alone. Finding a way to remain autonomous inside this thing that can easily consume you.

And yet, these men that I love, they are my family. Even as some of us drift apart. They are mine. And there is a beauty to that.

When I found myself falling in love with Conor, this beautiful little puppy of a guy bouncing around me full of energy and excitement, I remember thinking, “Is there no end to this?”

I met him at the bar where I was working at the time and took him into one of the back rooms. He was just supposed to be a hook up, some random hot dude, just another adventure.

And then we met the following week in the parking lot of my gym. We messed around in the bathroom at the bar. We had sex in a parking structure after getting bagels. It was sordid and sexy and fun.

Then Conor spent the night. I would get us hotel rooms. When we first said I love you it felt like something transgressive, something momentous and real.

I flew to Spokane Washington where Alex was living for six months while working on a TV show to tell him that I had met somebody. It wasn’t an easy conversation. Our open relationship didn’t take falling in love with someone new into account. What did it mean? How did we make this work?

It was especially hard on Alex. He was a thousand miles away. He already felt alienated from Jon and me. He was working long and treacherous hours.

I introduced Jon to Conor. The three of us would sit in our living room and watch Broad City and Difficult People and eat In and Out burgers and Thai food and the two of them would cuddle.

Alex met him for the first time at Precinct, a gay club in downtown LA. None of us knew how it would go. Alex is like me: stormy and volatile: but I had faith that he would see in my new friend what I saw. And I was right. He did. That night the three of us brought pizza home for Jon and watched TV and Alex and Conor cuddled on the couch together. And it seemed maybe things would be ok.

But life can be treacherous. There are pitfalls. Mistakes are made. People grow and they change, the things we need from each other change.

And we find ourselves growing apart. Growing into something new.

Movie style happy endings don’t exist. People we love get sick. The circumstances of life make what had once seemed so easy, so perfect, suddenly impossible. We grow older. We fail almost as often as we succeed, sometimes more.

And yet, these men that I love, they are my family. Even as some of us drift apart. They are mine. And there is a beauty to that.

Even when none of it seems to be working out, I am reminded that I was once so madly in love with them that I thought everything was possible.

I am always asked what it means to be poly. What it means to live with so many men in my life. And it is like anything. It changes. How I view it changes. Sometimes I wonder if we opened too many doors, allowed too many people into our lives, and other times I think that I couldn’t have done this any different.

For better or worse, maybe this is just who I am.

None of this is easy. But as my father likes to remind me, nothing is. It’s just a matter of whether it was worth it or not.