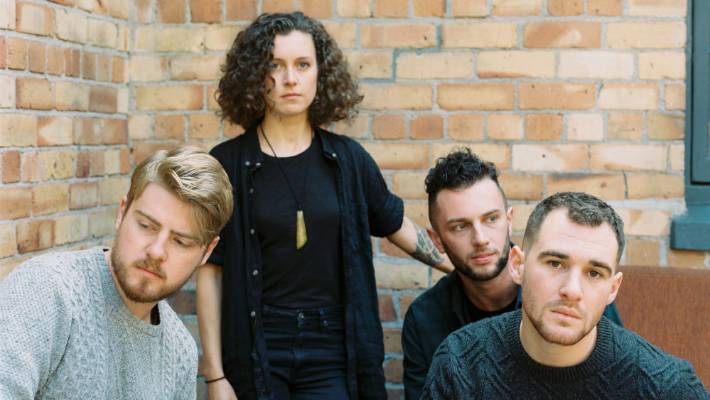 Where Self-Exposure and Ambiguity Meet: Alea front-man Alex Farrell-Davey opens up about the personal lyrics and lack of gender pronouns on his band’s debut album Henry St.

A rare offering for a first album, Henry St doesn’t easily fit within a genre label. Instead, the band focused on the overall flow of the album to create a distinct arc for the listener, beginning softly and rising to a pinnacle before dropping back down again. Two years in the making, the final collection of 12 songs have evolved with the band – Alae began life as a duo consisting of Alex with guitarist and co-songwriter Allister Meffan, but now have settled into a permanent line-up that includes bassist Marika Hodgson and drummer Jayden Lee.

There’s a distinct lack of the use of gendered pronouns on the tracks that make up Henry St, something that Alex, who is openly gay, was very conscious of. Unwilling to alienate anyone who might otherwise connect with the music of Alae, the band wanted to embrace a sense of ambiguity and anonymity, giving their listeners space to interpret the music for themselves.

“I’m trying to be an advocate for everybody. In my head it’s really presumptuous to assume what love is, and to write that down in a really stubborn way. Some of my favourite songs talk about something that I’ll never experience – I’ll experience the love, but I won’t experience ‘her’… I don’t associate with that. It’s a real bummer to listen to a song and want to passionately sing the lyrics, but they’re not ambiguous enough for me to really fall into. I don’t want people to do that with my music, I want everyone and anyone to be able to listen to it and connect with it.”

Using all of his personal experience as inspiration, from his childhood musings on his parent’s relationship right through to his own romantic pursuits as an adult that have gone south, Alex is a little more hesitant to play into his sexuality, feeling that element of his story is not overly relevant to his music.

“I feel like it’s cooler now to be a bit more nonchalant… For me it comes down to empathy – every feeling, every thought, is totally transferable. Growing up and questioning your sexuality is something everyone’s done. You don’t just have to identify as gay to show people that you are different. It’s a hard thing to wrap your head around when you’re young, but people are wrapping their heads around a million things when they’re young.”

That distance is interesting, but Alex reiterates that his authenticity is probably the most valuable thing to him, especially as momentum for Alae is just beginning to kick off.

“It’s just my sexuality to a certain degree has helped to condition who I am, it’s helped me to be more open-minded and accepting and honest with myself. That’s more what it actually does for me.”

But at the end of the day, his final words are to “Just be yourself” – something that both he, and Alae as a band, seem set on achieving.