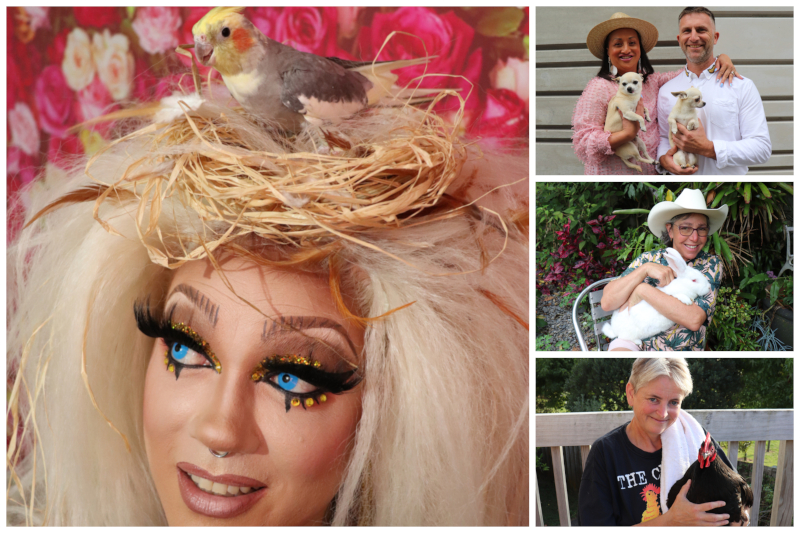 From fur babies and feathery friends to scaly soulmates, Dog-lover Steven Oates hunts out some of our most colourful community members and their equally adorable animals.

Pretty Girl the Cockatiel, with Lola Popsicle (Socialite and Stylist to the Stars)

“Pretty Girl was born a boy but now identifies and a girl,” says Lola, who always had birds growing up. “She’s my baby and always screams when I leave the house or arrive home. She even knows the sound of my car,” says Lola of her adopted avian child who often flies around the house wolf-whistling at her mum.

Oliver was seen running up and down Garnet Road three times before Lisa found him in a box outside the Dairy. “I would rather he was free but I feel my role is to protect him,” says Lisa. Oliver now has a three-level home to lounge about it and enjoys watching TV with Lisa. “We watched Wimbledon together. He really liked that!” Oliver also lives with two cats. “The kitten now think she’s a bunny!” Says Lisa, who describes Oliver as, “a real bloke!”

When nine-month-old Merlin isn’t falling asleep on Taine’s shoulder or hanging out in the sun (on a leash) with Taine, she’s eating live food and snoozing. Taine loves all animals but thinks Bearded Dragons are “random and cool and different…. they are really unique pets!”

“I can’t have pets in my flat so I made an exact replica of the fish tank I had growing up as a kid” Fabs tells us. “They’re relaxing to look at, they entertain me and they keep me company.” Fabs has about 15 fishy friends in his aquatic menagerie including a snail that can change gender.

Chloe and Jose with Jono and Jaye Glam (Wellington ‘It’ Couple)

Brother and sister Chloe and Jose, are permanent fixtures on the streets of inner-city Wellington, going everywhere with mum and dad. Chloe is “the psychopathic one and quite snobby,” whereas Jose is “a mummy’s boy and very friendly!” The eight-year-old Chihuahua’s are “totally our babies! I’d be sadder if anything happened to them over Jono” says Jaye with a wink.

Clair says she has loved chickens her whole life but wasn’t allowed them as a child. She’s making up for it now with eight-year-old Alice, who she says is “very beautiful but quite bossy”. Alice, who “has a lovely boofy bottom”, was adopted from stall-owners at the Grey Lynn farmers market and now shares a large coop with another chook named Vanessa!

“He’s a very relaxed cat, he loves hanging out in the garden in the sun and loves playing with my niece and nephew,” says Callum. Seven-year-old Jax was an SPCA rescue and was adopted to be a younger brother to Harry, another feline fur child.  “It gets cold down here at night, I need their cuddles to keep me warm,” says Callum. That’s three furry ginger tom cats living under the one roof – Meow!

Five-year-old Pitch got his name because he was pitch black as a puppy. He is Niccole’s fifth Poodle and is “the most loving dog I ever had!” A birthday gift from her brother, Niccole says, “he has the soul of an Angel and is pitch perfect!” Niccole has been hooked on poodles ever since age 16, when her first boyfriend bought her one.