The American play, Six Degrees of Separation, opened to a packed, expectant audience at the ASB Waterfront Theatre last night (16th August) and delivered on its promise to make us laugh while showing us our heart’s desires. 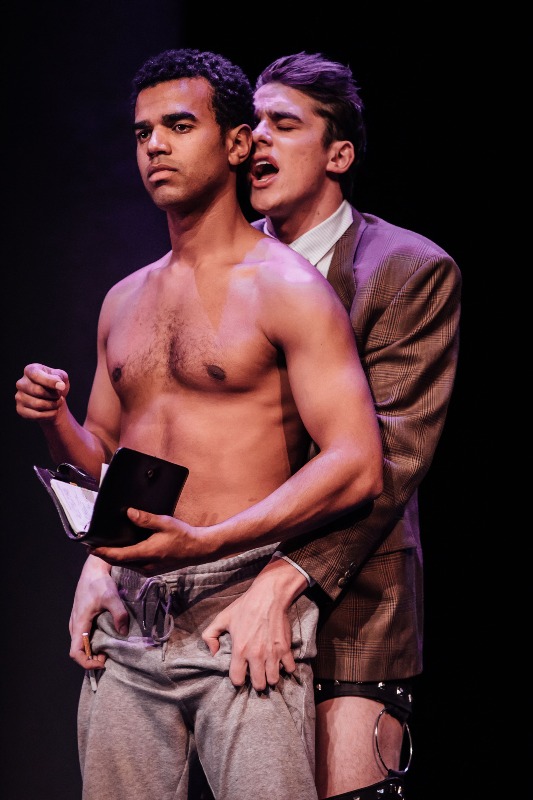 Perhaps even more relevant now in these days of ‘fake news’, the play – based on a true story – follows the captivating and hungry Paul, an African-American who yearns to live his life as a moneyed member of New York’s upper class.

Paul pretends to be friends with the adult children of Ouisa (Jennifer Ward Lealand) and Flan (Andrew Grainger) Kittredge and to have lost everything, including the thesis he is writing while at Harvard. He also says he is the son of Hollywood actor/director Sidney Poitier and is casting extras for scenes in the to-be-made musical Cats.  None of this is true but such is the parental heart’s desire to have the respect of their children that both adults accept the story and also buy into it.

A caress for our and New York’s LGBTQI community comes when Paul takes a man ‘home’, which also begins to undo the scam when they are discovered by Ouisa. Costume designer Lucy Jane Senior gets big ups from this reviewer for putting naked male legs into black thigh-high boots, leaving eight centimetres of exposed skin at the top. Very sexy.

In exploring Paul’s hungry heart, award-winning playwright John Guare turns to another American classic, the novel Catcher in the Rye. He uses that novel’s teenage angst and desire for “something outside ourselves” in Paul’s passionate monologue, which denounces the ignorance and indifference to racism, sexism, and poverty of the richest layer of New York society, while he himself aches to bathe in the waters of its soothing affluence.

As Ouisa, the compelling Jennifer Ward Lealand unmasks her character little by little, slowly melting an icy, confrontational composure to warm participation before the scam is revealed. The poignancy of her final line echoes our own worry as, in realising that she has also unmasked her own heart’s desire, she asks “But how do we keep the experience?”

Tane Williams-Accra convinces as Paul, bringing bounding energy to his portrayal, whether triumphantly insisting on casting his unwitting hosts and their children in Cats, or scrambling for belief when his scam is discovered. While everyone in the cast delivers, Mathew Moore amuses as the Hustler, Lisa Chappell grabs attention as Kitty, and Shimpal Lelisi is commanding in both his roles, as the doorman and detective.

John Parker’s minimalist set is inspired:  six slender columns, six modern chandeliers, a couch and a couple of chairs. But with the equally inspired lighting by lighting designer Jo Kilgour, both the luxurious and uxorious elements of the play are illuminated.

Confirmed theatregoers have long learned to trust director Colin McColl, knowing that his experience both in life and the theatre can be relied on to choose work which both entertains and moves us. In these days of lying, of fools where knights should be and millions of children across the world hungry, every day just for food, entertainment like this which has such depth and truth feeds more than just our evening hours. It feeds our hungry souls.