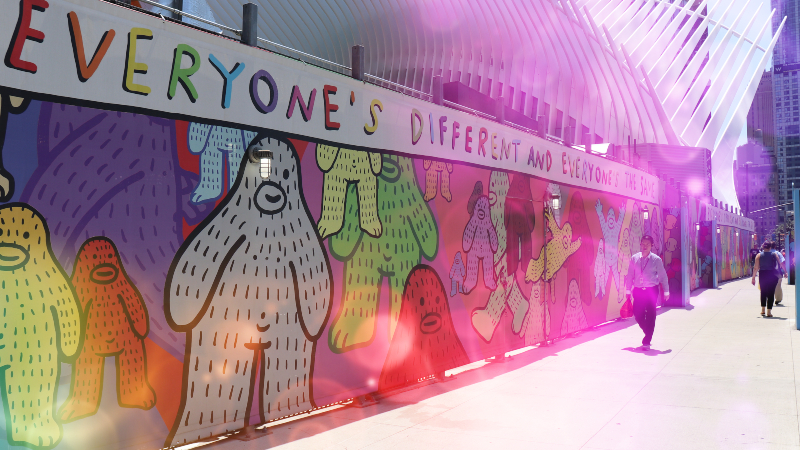 Leaving some space in your travel plans for simply exploring the city and seeing where it takes you is a must. Express roamed NYC’s LGBTQ+ hotspots and these are the places where we had the most fun.

Boxers – Hook up with a local for a beer and he will probably suggest meeting at Boxers. A gay sports bar is such a great concept and surely something NZ is crying out for. At Boxers big screens show the latest game, the bartenders are bodybuilders and pool tables are busy – perfect!

The Stonewall Inn – Despite having two floors, a big reputation and a huge history, Stonewall is a surprisingly small space. Naturally, it was packed over Pride month, attracting a young, fun, proud crowd, and there ain’t no party like a twink party!

The Eagle NYC – Like Bar on steroids, you don’t have to like leather to love The Eagle, but it probably helps. Spread over three floors, The Eagle offers different themes every night from ‘dads & lads’ to ‘jockstraps’ to ‘smoking’ to ‘feet’. If you can’t face the long queue to get in, you can try the similar but smaller The Cock, but be warned – it ain’t pretty!

Big Gay Ice Cream Shop – In 2009 cute gay couple Bryan and Douglas decided to start their own ice cream truck. They called it Big Gay Ice Cream and splashed a rainbow across the side. Flash forward ten years and they have three stores in New York and one in Philadelphia as well as distribution in California. Still gay, still rainbow covered. The USA Today voted it America’s Best Ice Cream Parlour, while Time Out put it on their list of Top 50 Things To Do When You’re High.

Henrietta Hudson – Arguably the most popular lesbian bar in New York (Cubbyhole is the other contender). Henrietta is super-busy neon-lit fun. Whether offering old-school soul and disco on a Thursday, rotating Dj’s for Friday’s club night or sexy go-go girls on a Saturday, a flirty good time is guaranteed. A must-visit for single girls.

The Met – With their Camp: Notes on Fashion exhibition (which runs till 8 September) the city’s biggest art gallery examines “how the elements of irony, humour, parody, pastiche, artifice, theatricality, and exaggeration are expressed in fashion.” The exhibition also provided the theme for this year’s Met Gala.

Staying: For my New York stay I checked in at the Arlo SoHo and Moxy Times Square; two hotels that really embraced the spirit of Pride and have bags of personality to boot.

The fashionable and sophisticated Arlo SoHo is a favourite with locals due to its A.R.T. SoHo rooftop bar which boasts views of the Hudson River and World Trade Centre. During Pride, their restaurant Harold offered hotel guests the chance to mingle over free drinks from 5.30-7pm every day! www.arlohotels.com

Moxy Times Square offered super comfortable bedrooms with funky wet-room showers in a location that feels like you’re at the centre of the world. The hotel feels young and fresh and boasts ‘Magic Hour’ New York’s largest hotel rooftop bar with views of the Empire State. www.moxyhotels.com