With the return of Lockdown Live tonight from 8 pm, express chats with Pacific Music Awards nominee, and FAFSWAG advocate Disciple Pati ahead of her live performance at 8:30 tonight via Instagram Live!

How have you been keeping yourself busy in lockdown?

I’m one of the fortunate people who has been able to continue working during lockdown; I work for FreshTV at the moment and so have just been creating content for them! It’s been a really busy few weeks for me, but I’m grateful that I have been able to continue doing what I love. In my spare time, I’ve been trying my best to work on my skills as a vocalist and putting the finishing touches to my next single … but that’s still a secret for now.

What’s the first thing you’re going to do when we go to level 2?

I think the first thing that I’ll be doing when we go to level 2, is probably going to see my friends!!! My friends are a huge part of my life and are a big part of who I am as a person, so not being able to see them face to face, and do stupid stuff with them has been the hardest thing in lockdown for me (which I guess speaks a lot to my privilege lol).

My work life and music life can get really really hectic and seeing my friends and family grounds me and helps me to remember what is important to me. We’ve been doing zoom/ video chat sessions … but it’s really not the same!!

How important has it been for local music artists to be able to take part in live streaming events like Lockdown Live?

I think it’s been really important for local musicians. The first reason is that the live performance sector is a huge moneymaker for a lot of local music artists, especially artists who live solely off their income from music. So to create a replacement for the live arena, really allows the audience to continue to connect with the artist in another way and keep the support going.

I also think that lockdown live, and live-streaming in general, connects to a different type of audience (i.e the audience that may not necessarily like going to bars/ events), which allows artists to further their reach.

Congratulations on being nominated in this year’s Pacific Music Awards, what did you do when you heard the news?

Oh man, thank you for your congratulations! When I heard the news, we were still in lockdown, and so I went to the dairy and went all out on the chocolates and other (alcoholic) beverages from the supermarket haha.

I took some time to share that with my family, and my sister, alongside my friends on Skype and the team behind the music video the next day! Wasn’t much else we could do to celebrate the moment, but I can say that it was kinda cool to just celebrate in a chill way.

The song (which you made a music video for) – The Boy Who Cried Woman – is making a very powerful statement – can you tell us more about the song’s meaning?

The Boy Who Cried Woman was written during a time when I was just discovering the history of Pacific people and their relationship with colonialism, and how that relationship affects the way in which Pacific people are discussed and portrayed in the media/ pop culture today.

I grew up going to mostly private schools, and so the majority of the demographic there was pakeha, and I thought it was interesting that when a pakeha kid did something stupid or participated in morally corrupt behaviour, it was seen as a part of their individual personality and not a reflection of their ethnicity.

It’s unfair to me because a lot of brown kids often feel like they have to be exemplary students, exemplary people in every way so that their actions don’t reflect poorly on their ethnic community.

To be human is to make mistakes, and to be human is to be complex – we spend our entire lives trying to figure out who we are, and it feels as though Pakeha people are given the opportunity to fully flex that out, while Pacific kids are restricted to either upholding the stereotype or subverting it – and apparently we’re told that is ALL that Pacific Identity is.

The truth is that we’re not one or the other – we are a complex people, who have to deal with a lot of complex and strange circumstances. In short; being Pacific is not what other people tell you it is – it is what Pacific people decide it is… but I think the world has yet to catch up with that concept.

Can you explain the concept behind the video?

The video was meant to personify the idea I talked about above; where the Pacific experience is so ironic, full of contradictions and really really complex, that it is, of course, confusing to navigate. The images each speak on an issue that I personally have faced in my experience dealing with what being Pacific means in a post-colonial setting; for example, the image with the young Pacific men standing on a rugby field speaks to the way in which Pacific mythology and culture are often upheld and idolised as being a warrior culture – something which New Zealand loves to draw upon when they start picking rugby teams, but that is the only context where it’s acceptable.

That same brute force on the field then becomes a worry and a fear when New Zealand remembers that a good portion of the lower socio-economic demographic are all Pacific people.

This, of course, leads to higher incarceration rates; and ultimately is a good reason why Pacific people are so scared of an armed police force in South Auckland. How can we expect Pakeha to treat Pacific people with respect and gentleness when Pacific people are only friendly with a rugby jersey on – and without one we are to be feared?

Essentially it discusses the tragic irony of being Pacific and how actually absurd the situations that all Pacific people across the board have to deal with – and brings light to the subtlety of discrimination in 2020, while also showing the certain power that Pacific people show in their circumstances.

You’ve performed at FAFSWAG events before. What does the FAFSWAG community and culture me to you?

FAFSWAG are such an amazing group of people; I first heard about FAFSWAG when I was a little younger because of the photographer Pati Tyrell who I was following on Instagram (and who I also share a name with hehe).

I had a birthday party at the same venue and the venue manager passed on my details to Tanu Gago who asked me to perform at one of their vogue balls. It was honestly one of the most amazing experiences I’ve ever had.

Their community really does their best to create safe spaces for (I believe) the MOST marginalised communities in the entirety of New Zealand; queer brown people.

Oftentimes as a woman, I feel like I have to put my femininity aside to succeed and get ahead, and FAFSWAG are reminders that your femininity is a power, not an obstacle. They have not only had to deal with Pacific communities demonising queer culture, but they have also had to deal with a certain absence of themselves in queer media and culture – and so I think the work that they did to create a space for themselves, to create work that challenges the norm in both those fields really gave me the strength to do so in my own work.

The time I’ve spent at their balls and gigs has really had a huge impact on me, and I don’t think they get nearly enough credit for the amazing work that they do.

If you could put together a festival of your five favourite NZ artists, who would be on the bill?

My Kiwi Festival line up would be:

Lockdown Live – a weekly live streaming initiative to support emerging New Zealand musicians. Thanks to our friends at NicNak Media starting from 8 pm on Wednesday the 29th of April, each artist/act will perform for 10 minutes, streamed live from their own Instagram accounts. With New Zealand currently in lock-down, many musicians are not in the same ‘bubble’ as band members and/or producers, so each act will tailor their performances accordingly.

You can tonight’s performances via these links 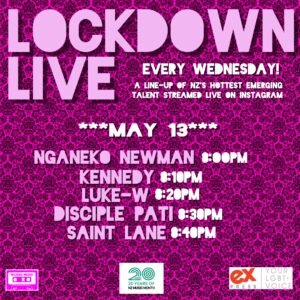 Lockdown Live was set up to help Kiwi artists during the COVID-19 Lockdown. With the New Zealand music industry being severely impacted by the pandemic you can help support Kiwi artists and donate to MusicHelps which provides useful information and sources of support to Kiwi music people affected. 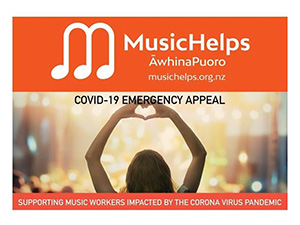