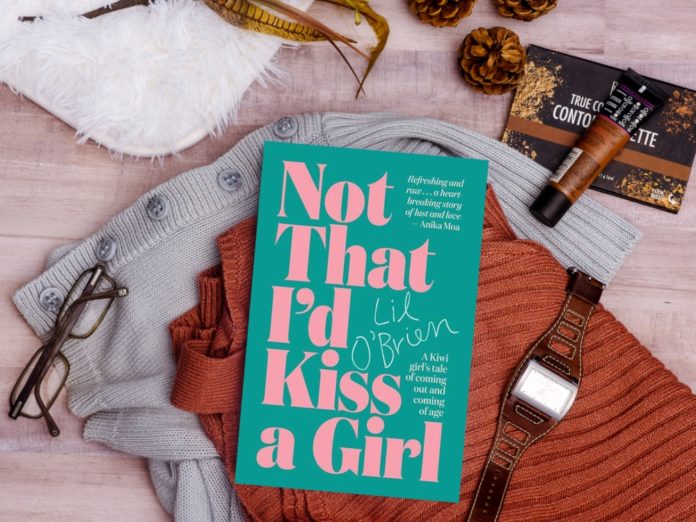 Demi Cox reads Lil O’Brien’s coming of age tale and relives her own past in the process.

I don’t think I’ve read a book that has made me think as much as Lil O’Brien’s, Not That I’d Kiss a Girl, which has left me with a heavy heart and a peculiar desire to return to the past. Books leave you feeling nostalgic. Another person’s story can stir the still waters of your own; especially when you think the storm has finally passed.

2020 has been a strange and horrible year. We’ve spent weeks in isolation, which has meant we desire connection, physical and emotional. When we entered isolation, it also meant that the lives we created outside of it were packed away, so to speak, put in the closet, into storage. Isolation may have meant returning to your hometown to be with your family, your parents, as you do when you’re on semester break, which is what Lil O’Brien did at the age of nineteen. I hope you can see where I am heading with this. Isolation may have meant uncomfortable and painful conversations, where the identities of queer kids across New Zealand ‘accidentally’ slipped out. We speak in ‘accidents’ and ‘whoops’ because that is what we have learnt, and some of us have been forced into isolation in the face of disapproval, within society at large and even from our parents. 2020 isolation of a queer kid is the real-time event of Lil O’Brien’s accidental coming out experience while on semester break at her parents’ home, her home. In the aftermath of familial cabin fever and pestering conversations of ‘what are you doing with your life, get a job, start thinking about the future’, Lil phoned a friend to vent. We have all been there. “Imagine if on top of this they found out I was into girls”, she said to her friend Jack. Time passes, a page or so later, “Finally, there was a long, loaded pause…Then Mum said: ‘You need to get out.’”

That line you read above is the very one we fear when coming out to our parents and family – it is also a line we might consider ‘extreme’ or ‘worst-case scenario’ in the setting of New Zealand. But it is also a statement that many queer people have had aimed at them like a gun that is about to shoot a bullet. That may sound extreme but it is the only way I can articulate the reading experience of Lil O’Brien’s book, which reads in such a filmic way that you can only imagine yourself as Lil and feel your blood turn cold. You think I’ve never seen Mum so angry, cool, mean, or evil, and you feel shame that you somehow caused that, that being you and what you are can inspire those charged feelings from others, especially your parents. What I will say now, though, is that Lil did nothing wrong. Her experience was the result of deeply ingrained prejudice, one that lasts generations and still exists, even in good old Aotearoa. Prejudice makes it incredibly difficult to be you, to be gay, to be queer, trans, a person of colour, and also a woman. Prejudice makes it difficult to come out and Lil wasn’t even ready to say who or how she identified. That statement was not on the horizon but thoughts were stirring and her Mother heard her ‘mid-thought’, with her guard down, where that part of her life accidentally slipped out of the closet – it was the part her parents were not supposed to see or hear, yet – it was like a photo taken when you are not ready and the image became a mug shot.

Reading Lil O’Brien’s book made think of all the queer women I have known and dated, whose parents were not (and are still not) accepting. I feel a sorrow that will last a lifetime, an anger that still pulses through my veins, and also a love for these people who have been so resilient and brave, like Lil. I have been that person that says, “they’ll come around”, “she’s your mother, she loves you.” I know it is frustrating for that other person to hear or believe, and I am still learning what to say.

But you know what frustrates me? Is how hard and shameful it can be to say, “I’m gay”, “I’m a lesbian”, “I’m bisexual”, “I’m queer”, or “I’m trans.” When we feel affection for another person, we cannot simply say, “I like you”, “do you want to go out sometime”, because those statements are too direct and cross a line. We think of indirect ways, like Not That I’d Kiss a Girl…but…if I did… it would be you…? While reading O’Brien’s book we should also pay attention to language, how her book searches for a way to describe oneself – herself – and her attraction to other women – how our understanding of ourselves is affected by the language other people use: disgusting, unnatural, a shame. At one point Lil writes that the experience of a child coming out can be compared to a person that has died, to grieving, to loss. For parents, this ‘loss’ is their hope and expectation. That their child would get married, have children, be successful. If only they could know that being queer is not an aspect of loss but becoming, formation, transition, comfort, feeling at home, the latter of which everyone deserves and has a right to feel.

Healing is painful. Reading Not That I’d Kiss a Girl is like a deep tissue massage, a beer after work, a long and wholesome sigh. Her book is that scream you want to release because you know it will feel good – it says just what you were thinking and all of a sudden you don’t feel so alone. When I read her title, Not That I’d Kiss a Girl, like words scratched onto the walls of a cave, I am back in that dimly lit space and trying to make sense of her words – I feel nostalgic.

Demi Cox is a bookseller at Unity Books Auckland, where Not That I’d Kiss a Girl is available.