Demi Cox talks to author Lil O’Brien about the inspiration behind her new book Not That I’d Kiss A Girl, The L Word and being the ‘gayest’ person.

Your friends describe you as the ‘gayest person they know.’ So, what does a day in the life of Lil O’Brien (aka THE gayest person) look like?

Oh, you know, I’m just an ordinary person, really. Wake up cuddling my cat, RAGE AGAINST HETERONORMATIVITY, send a bunch of messages checking in on the emotional wellbeing of all my female friends and telling them their feelings are valid, and then after the day is done, I look at lesbian TikTok on the couch with my cat all night because I’m a lesbian, and lesbians don’t go out during winter. 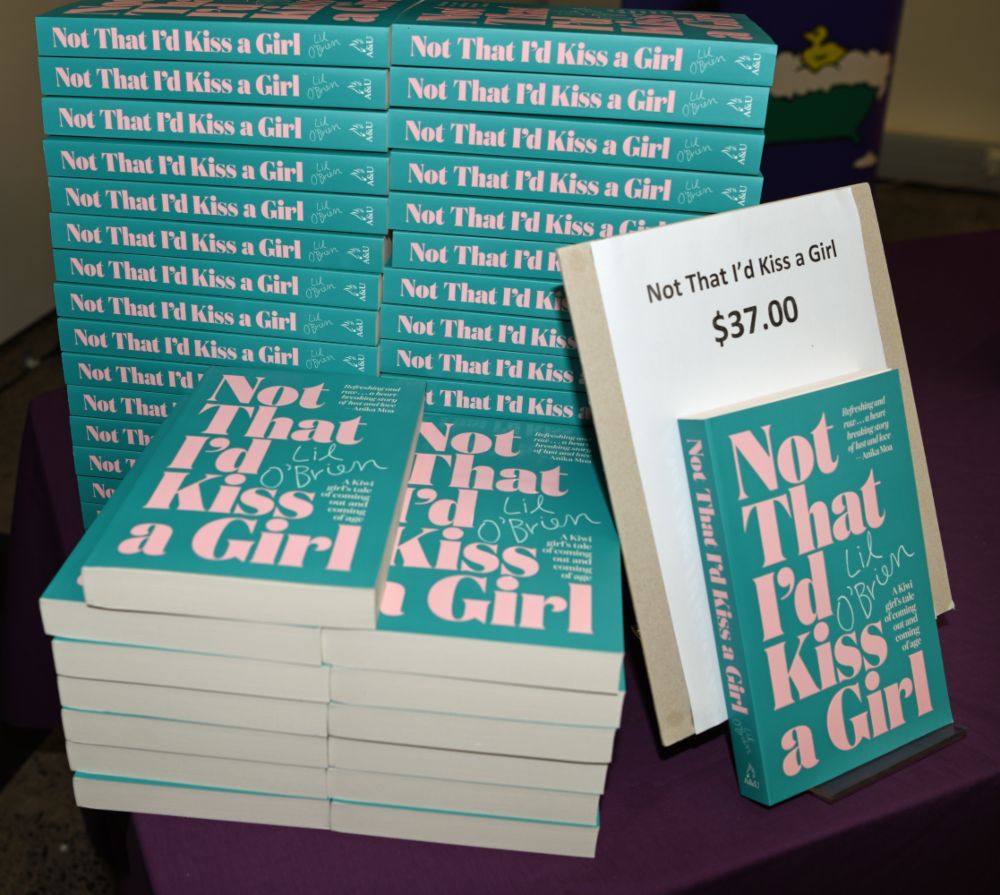 The title of your book, ‘Not That I’d Kiss a Girl’ pleasantly captures some attention! But its genesis carries some negative connotations, as you accidentally outed yourself to your parents at the age of nineteen. What was your motivation for writing about this experience?

I think it was always going to be just a matter of time. I carried the events around my coming out for many years and I just couldn’t stop thinking about how it affected my life, good and bad. But it wasn’t until I started going into Auckland high schools with Rainbow Youth when I was in my early twenties, and telling a very short version of the story as a part of their gender and sexuality education programme, that I realised I had to sit down and write my story. I knew it would mean something to a lot of people because I saw it affect people in real-time.

When I decided, that was that and I knew I would do it… and from there it only took me eight years (!) I had periods where I stopped writing because it was too hard, emotionally. Writing about true events in your life can be rather painful, it turns out because you have to really go back and explore them – you can’t look away. And once you’ve done that you have to step back and find some emotional distance to write about them in a way that other people want to read.

That’s why writing this book has been really cathartic and healing for me. It’s a bit like that saying – and I’m paraphrasing – that life must be lived forwards, but can only be understood backwards.

In your book, you discuss at length the role and importance of queer representation. In your case, the infamous series ‘The L Word’ helped affirm your identity, as well as your first ever experience of seeing a queer film at the cinemas. I think so many of us can relate to this. Do you have any favourite queer reads?

I have so, so many favourite queer reads. I was going to give you a selection – one that made me cry, one that makes me laugh etc, but then I realised that all my top favourite queer reads make me cry (should I be worried for myself?) So, here are some of the books that make me cry: Stone Butch Blues by Leslie Feinberg, My Lesbian Experience of Loneliness by Kabi Nagata, The Color Purple by Alice Walker. And if you really want to cry –like sob your guts out cry, A Little Life is one of my favourite books of all time and it doesn’t even have any lesbians in it. That’s how good it is.

As a bonus, my friend Mud Howard is a beautiful poet who writes about many things including the trans and queer experience, so go look up their stuff online. It will blow you away.

It is incredibly refreshing to read how often you refer to yourself as a queer person – ‘queer’ being a word that has been used as an insult against people like us but has also been positively reclaimed, by us. Your book is dedicated ‘To all the queer kids, who are exactly who they were meant to be.’ How beautiful! What does the word ‘queer’ mean to you and why have you chosen it over the word ‘gay’ or ‘lesbian’?

I talk a little bit in the book about why I felt most comfortable ultimately identifying as gay when I came out, but also used ‘lesbian’ because the word made me uncomfortable and I wanted to challenge myself on that. To reject any embarrassment or shame around it, even though I don’t really like it as a word.

For me, one of the great things about being not straight is embracing fluidity, including in the labels we use (or don’t use). So I use queer now as well, depending on context and what feels right in the moment. I use all three interchangeably. I like ‘queer’ because it feels more inclusive and its use is quite flexible both as an umbrella term, or even to describe a way of seeing. At the time my response was a mix of “Huh, what a way to excuse some shitty behaviour’, and a reluctant acknowledgement that the South Island did and does sometimes feel like it’s a little behind the times in terms of awareness and understanding of LGBTQ+ people. That is a very sweeping statement and of course, isn’t true for everyone who lives in the South Island, which I love – I am a proud South Island gal for life. And I’m not sure if things would have been different if I’d grown up in Auckland. Prejudice happens for a lot of different reasons.

You write candidly about your difficulties with physical intimacy, how the physicality is always emphasized in education but not the emotional connection, or even consent. Could you speak to your experience around that?

Well, over the years I’ve learned that my ability to have positive sexual experiences is very entwined with my mental and emotional wellbeing. Sounds obvious, right? I talk about this a bit in the book when sex was really new to me and I was also going through a difficult time emotionally, and things didn’t work the way I’d assumed they would.

But I didn’t explore this for a long time after my coming out, and I wish I’d done it earlier. I was really affected by shame in my early sex life, which I didn’t understand because I was out and proud! I didn’t understand that you can be so happy with yourself and still be affected by the messages you’re getting, from society or from the people who are supposed to accept you. Ultimately, I think you have to address these things head-on – and I wish society was more open and encouraging and diverse about education around sex, for all kinds of people.

Your book can be described as a tale of coming of age and coming out. Now that you’ve completed this book, would you say that you’ve ‘officially’ come of age and out?

I think people will know I’m a lesbian after reading this book. I just have an intuitive feeling about that. So I don’t think we can say I’ve ‘officially’ come out, I think I’ve actually raised the bar to becoming a professional lesbian now. I need a business card. 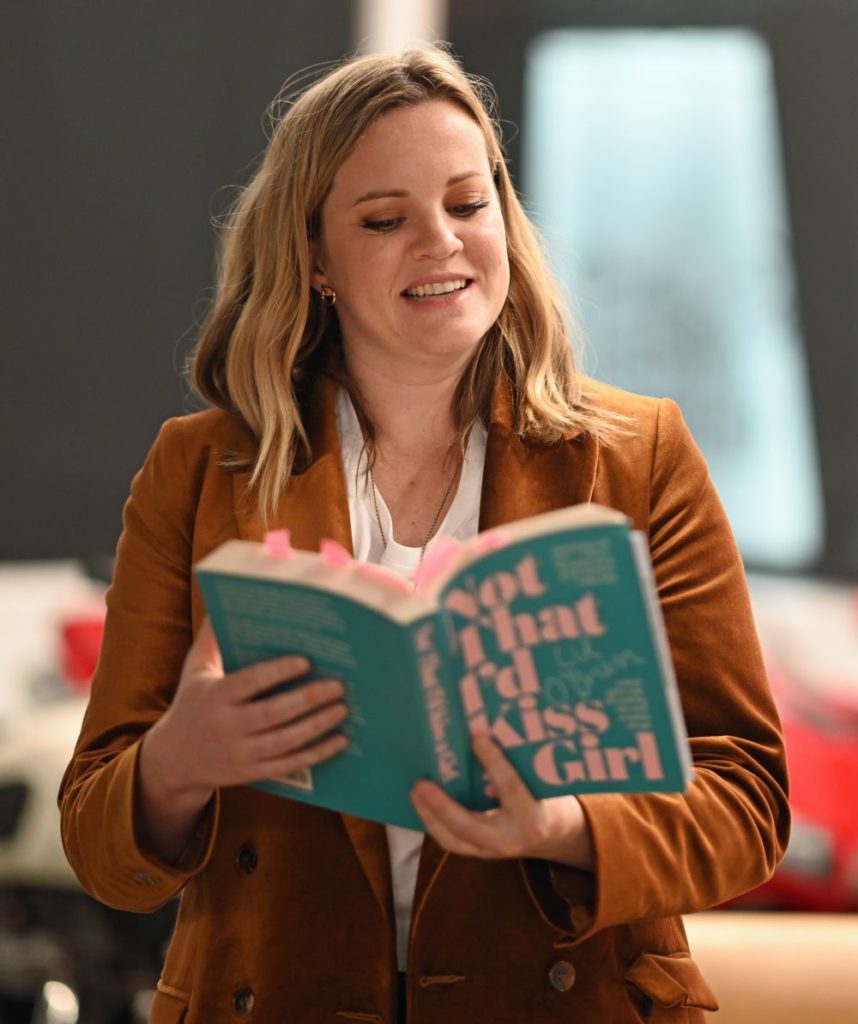 Ok, some fun questions. What are your top five gay anthems to dance to on a Friday night?

Look I know I am a total booze hag in Not That I’d Kiss A Girl, but I’m an old fart now so I don’t often stay out late enough to dance, and my hangovers last three days. You’re more likely to find me in my lounge alone, drunk on two glasses of red wine singing ‘I Want to Come Over’ by Melissa Etheridge to my dog. Or, having a wee boogie to ‘I Wanna Dance with Somebody’, which I think we can class as a queer anthem seeing as it turns out Whitney Houston dated a woman for many years.

Who is your favourite L Word character and why?

I have spent many parties debating this with other queer women and it is impossible to choose just one. I love them all in some way. Except for Tim who makes me wanna vom in my mouth, and also the guy who played Tim in Jenny’s film Les Girls because all I think about is him jumping naked into Bette’s pool. That was a lesbian make-out pool, absolutely not meant for naked straight men to desecrate.

I only ask this because I would love to see more writing from you: Can we expect to see another book, say a novel?

I will totally be writing another book – whether it gets published is another story. And it’s quite likely to be a novel because I don’t think I can go through writing a memoir again. A.M. Homes – a famous American writer – once said writing a memoir is like picking at a scab, and saying “Look, today it bled this much!” I’ve always really identified with that.

What I do know is that what I write will be totally queer. I wouldn’t have it any other way.

Not That I’d Kiss A Girl is out now!

Photos | Taken at the Not That I’d Kiss A Girl book launch by Peter Jennings.