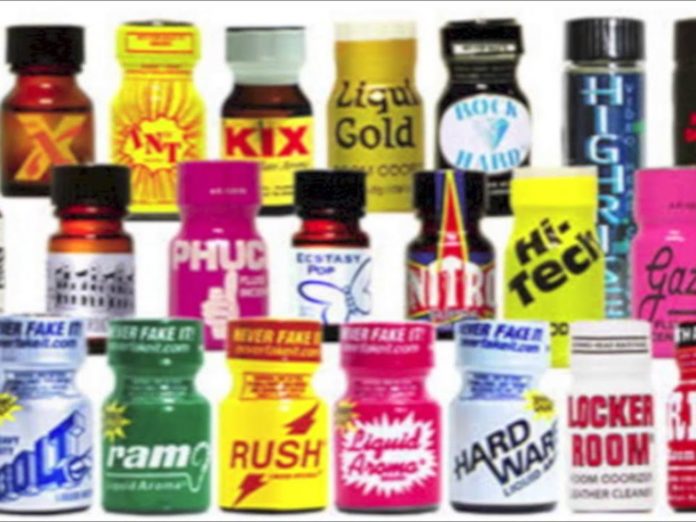 Why have poppers been banned in New Zealand? Why haven’t our Pride groups fought this? Has homophobia played a part? Long time community activist and social commentator Michael Stevens asks the important questions.

Amyl. Poppers. Rush. Jungle Juice. Leather Cleaner. “Room Deodorizer” (That one always puzzled me in my teens when I’d see that description in gay magazines – why did gay men need to deodorise their rooms so much?).

They’ve been part of gay men’s life from before I was around, and I’ve been around a while. From dance floors to bedrooms, we’ve had a lot of fun with them, one of the most innocent of all recreational drugs. The rumour is that they used to pump them through the air-con at Alfie’s in the 80s, but I don’t know if that is true. We certainly used to take them out dancing and of course for sex after dancing. Some dancefloors stank of them. Getting your arm jostled as you had the bottle up to your nostril and getting a dose up your nose was a hazard.

Amyl burns around the nostril weren’t unusual, some wore them as a mark of pride, but if you were wise enough to put some vaseline around your nostrils it wasn’t a problem.

But now they’ve been banned in New Zealand. You have to wonder why.

They don’t present any clear health risk – like anything, they can have bad side effects, especially if combined with viagra. But nothing is without risk, and I am struggling to think of any regular reports of people dying from popper use.

There doesn’t seem to be a solid medical or public health rationale behind this decision. It started in Australia, with the TGA (Therapeutic Goods Administration) moving to ban them, and Medsafe here picking that up. The TGA appears to have backed down a bit, allowing them to be sold in pharmacies. But as they point out people don’t plan sex days ahead and the old style of simply having them available for purchase at sex-on-site venues is pragmatic and again, shows no real public-health or medical concerns. And stigma and shame is a factor – if you have any shame around your sexual practices, having to get a prescription from a doctor then go to a pharmacy for something that we used to just be able to grab when we needed is a backwards step.

What’s the opposite of shame? Oh right…

I find it curious, and disappointing, that none of our Pride groups took this piece of work on. Given the central role that sexual liberation played in so much of the foundational work for our communities, the fight for pleasure and agency here seems something worthy of their attention, but not a peep. Too scary and controversial for them maybe. And, I suspect, a bit of “Oh those gay party-boys, so frivolous and unwoke.”

Some groups have taken it on, and not surprisingly, they’re the ones most focussed on gay men’s health and well-being, as this submission against from the NZAF shows and this one from  Body Positive, both standing up for our communities and opposing this decision.

I’ve heard there have been some very heavy-handed tactics used by officials enforcing the ban, forcing shops to destroy any unsold stock.

A number of people have observed that this could be seen as a form of homophobia. I think so, and even more than that, a form of sexphobia.

Gay men have often been criticised for our supposedly excessive sex-lives, our insatiable, dangerous appetites, that surely ought to be suppressed. I’m no longer in that category, but I do remember my days of orgiastic fun fondly.

Gay men are the group that use poppers most. There does seem to be a thin-lipped puritan attitude to poppers from the mainstream, and some of our wider queer communities, because more than dancing, their main use is for fucking. Ass fucking at that. And that pushes all sorts of judgey negative buttons for a lot of people.

Some people don’t want us to have fun.

And there are unintended consequences. A friend recently told me a young friend of his had tried meth for the first time because he couldn’t access poppers. Is this really progress?

The lack of any meaningful community consultation with us, the group that uses them the most, is also suspicious. They sneaked this one through.

Does it really make a difference? Why not just be “natural” in our sex lives? I’m pretty sure we are sometimes but wanting to enhance something as wonderful as sex is also natural. Making it better seems to be a pretty constant human drive, especially when it comes to sex.

Another friend remarked that a whole lot tops are suddenly going to find out they’re not really the sex gods that they’ve been told they are. That got a wry smile from me.

What Can We Do?

Let’s face it, talking about drug use and sex isn’t easy. It can affect people’s careers or other life opportunities, so it’s pretty hard to get people willing to stand up in public and say “I have used poppers for years, love them, and want them available again.”

And again that’s mainly due to the fact we use them for making taking cock up the arse even better. Kinda hard to mention them without bringing that up. As a society, we’re not very good at talking about sex, especially sex that still is seen as wrong by many.

I know there are a few people looking to see what can be done to change this, but I think it will take some sort of campaign, and that takes time and energy and has no guaranteed outcome.

I predict people will start making and selling it themselves, it’s not that difficult to manufacture. But they’ll be breaking the law doing it, and some are bound to get caught.

If nothing else, this is another example, as with cannabis, of how prohibition just doesn’t work. It creates a problem where there wasn’t one but makes some people feel smug and self-righteous.

But keep on fucking I say, enjoy yourselves.