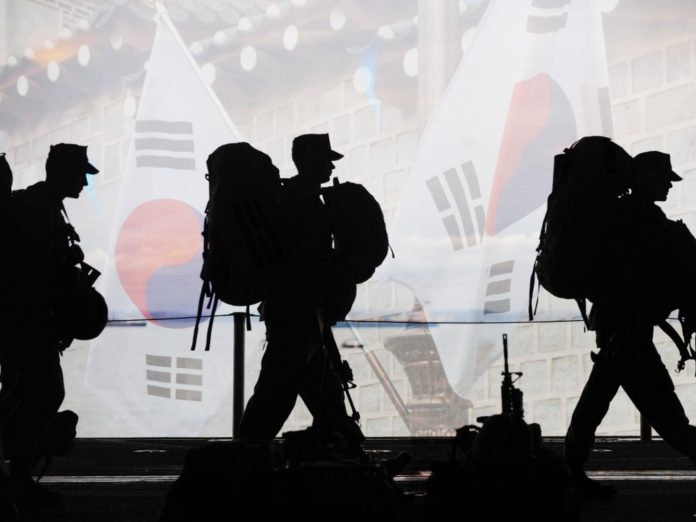 Two men have been sentenced for consensual sex by a military court in South Korea that insists the consensual activity “bordered on rape.”

According to reports from The Guardian, the two men were given a six-month suspended prison sentence, after being found guilty of “indecency”.

Despite same-sex sexual activity being legal in South Korea, this oddly only applies to civilians.

Considered “sexual harassment,” and punishable with up to two years in prison, military personal are subjected to article 92-6 of the nation’s military penal code which bans military personnel from same-sex sexual activity.

It is also currently compulsory for all men in South Korea to serve a minimum of 21 months in the military.

According to the recent ruling, one of the male soldiers allegedly entered the other’s tent on multiple occasions over the period of December 2020, where they engaged in oral sex.

As a result of the South Korean military’s ban on same-sex sexual activity, the men were considered to have “molested” each other by the court.

Despite their defence lawyer arguing that the sex between the two men was consensual, the court insisted it was “considered contrary to good sexual morality” and even “bordered on rape.”

Kim Hyung-nam, who is the director of the Center for Military Human Rights Korea, explained to The Guardian that the ruling was “undeniable discrimination against sexual minorities.”

“Article 92-6 preservationists say the military will suffer damages due to the collapse of military discipline, but it’s difficult to see how same-sex sexual relations under mutual consent inflict such damage.”

The ruling follows a recent report conducted by Amnesty International which highlighted that while LGBTQ+ people are becoming “increasingly visible” in the nation of South Korea, soldiers continue to face “harassment, discrimination and violence at the hands of their commanding officers and their peers.”

Interviewed for the report, anonymous South Korean soldiers told of experiences in which they were being questioned about their sexuality before their military service, while others said if they were “considered feminine”, they were subjected to physical and sexual abuse by higher-ranking officers.