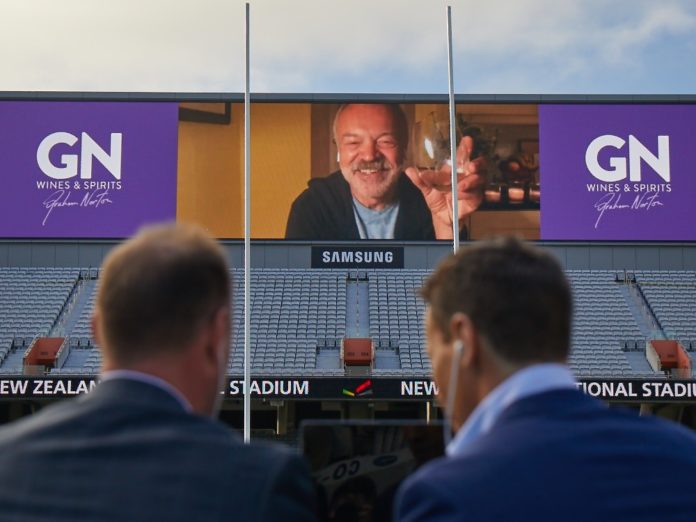 LGBTQ+ icon Graham Norton took over New Zealand’s biggest screen at Eden Park to blend his new range of vintage wine with the kiwis at Invivo.

The 50,000 seat Auckland stadium was opened exclusively for Tim and Rob, who were situated on the halfway line and looking up at the Irish television host on the big screen.

Speaking about the experience Graham says “It was a lot of fun blending the wine and seeing the guys live at Eden Park stadium – I kept on expecting someone with a lawnmower to appear in the background!”

It was game-on as Ireland-based Norton dialled in his Kiwi business partners from his home in West Cork at 8 pm in the evening. Invivo Co-founders Tim and Rob had couriered seven Sauvignon Blanc samples to Graham, harvested in New Zealand in March this year, along with a winemaking kit filled with beakers, which Graham set up at home.

Tim and Rob, 18,311 kilometres and 12 hours ahead of Norton, arranged their winemaking kit on the pitch at Eden Park Stadium. Over a two-hour live stream, the trio collaborated to create and sign off Graham Norton’s Own Sauvignon Blanc 2021 vintage.

“It’s a classic New Zealand Sauvignon Blanc, it’s a grown-up wine and it’s elegant and delicious. It’s surreal thinking that our little collaboration together that started out all those years ago is now all over the world. I’m amazed, and proud of it too. I don’t just put my name to the wines, I’m involved and I love being part of the process.”

Tim Lightbourne who is Invivo’s co-founder says “After zooming Graham on a laptop and our winery boardroom TV screen for over a year now, Rob and I decided to take Graham to the big screen! We thought there would be something pretty special about Graham being live on the country’s biggest screen (40 metres) and our largest stadium at 8 am in the morning. We were not wrong … running down the tunnel onto the pitch was fantastic, Rob and I have certainly fulfilled a few childhood dreams today!  We could tell Graham was also excited when we showed him live on the big screen at Eden Park stadium. The team at Eden Park were great to work with, we even had the home team changing room to get ready in. It really felt like game day.”

Graham Norton’s wine and spirits range – that now features Prosecco, Prosecco Rosé, Sauvignon Blanc, Rose, Shiraz and two Irish gins (including one pink) – has clocked up more than 200 accolades over the years – for more information head to the Invivo & Co website.