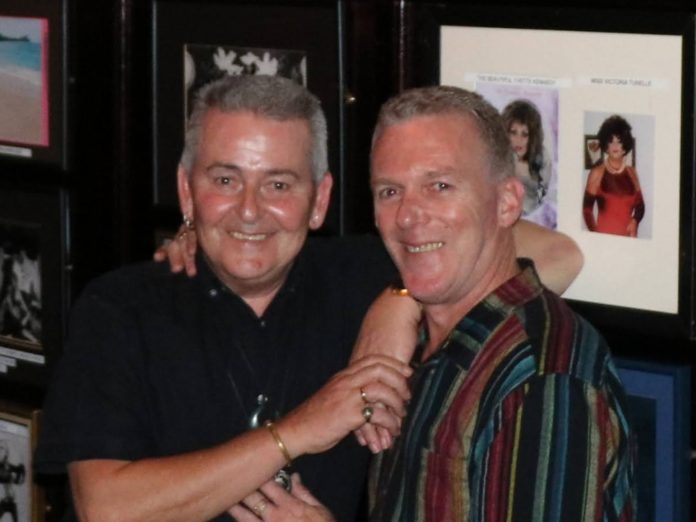 Mal & Scotty Kennedy-Vaughan have been the lifeblood of Wellington’s LGBTQI+ hospitality scene as far back as most of us can remember. So it came as a shock when after a combined 77 years in the industry, they announced they had put S&M’s cocktail bar up for sale. Richard Tait and Fraser Shaw sat down with them on a rainy Sunday afternoon over a bottle of bubbles to talk about their journey, the highlights, how society has changed and what’s next for the pair.

Their journeys in hospitality started long before they even met. Scotty started at the Civic Tavern in Auckland. With the drinking age being 20, he had to lie about his age to get the job. He then headed off on his OE, managing bars around England for a few years before returning to NZ. After a stint in the Merchant Navy, Mal worked at various gay bars through the 1980s and 90s, including Alfie’s, Caspers and the Dorian Society, which was a secret, underground bar before the days of homosexual law reform. Members were issued a key, with which they would let themselves into the front door before climbing the stairs and paying $4 at another door for entry. Once inside the bar, drinks were free, to avoid liquor licencing laws, but all members had to take a turn working at the bar.

Scotty recalls first seeing Mal behind the bar when he was working at Bamboo Bar in the Oaks Complex. Little did he know that many years later, their paths would cross again and their journey together would begin. It was the early 1990s at the Mr Gay New Zealand competition in Auckland when they met and have been together ever since.

Their first foray into working together was the Dome Bar, ironically located in an old public toilet block where gay men used to cruise. They spent months renovating the old toilets into a modern, live music venue, with help from their wide network of friends and supporters. After only a year running the venue, a fall-out with their business partner led to them walking away. Word spread within the community within 24 hours, long before the days of social media.

Their next foray was Pound, a nightclub and bar, upstairs in the Oaks complex. The sign on the front door quipped, “The straight route is often boring.” Famed for hosting drag shows and Mr Gay Wellington competitions, revellers would dance the night away until 5 am when Donna Summer’s “Last Dance” would play, letting them know it was time to head home before the sun came up. Pound would also provide a venue for young, amateur drag queens to hone their skills, most notably Polly Filla, who has since moved to Melbourne and established herself as one of their top drag performers.

In 2004, smoking in bars was banned, which changed the way the bar operated. With no practical smoking area, the crowds would spill downstairs onto the street. At the same time, the Civil Union bill passed. “You couldn’t smoke a fag, but you could marry one,” jokes Scotty. The long hours would eventually take their toll, leading Mal & Scotty to give up the business, taking time out to help a friend set up the Lanes bowling club.

After a year or so, they were asked to manage a struggling bar in Cuba St, and S&Ms was born. Over the last 14 years, the bar has been a focal point of the LGBTQI+ community, welcoming locals and visitors from across the country and world. You were always guaranteed a warm welcome and a fabulous cocktail! The bar has been home to the cast and crew of many touring musicals, with their programmes lining the walls. The ‘wall of fame’ displays photos from iconic members of our community, including Carmen, Louisa Wall and Daniel Feilding. They hope the wall will remain as part of the bar, as a legacy.

When asked about highlights, Mal & Scotty fondly remember parents of a young transgender man coming into the bar and thanking them for giving their son a safe place to hang out.

While they have seen the LGBTQI+ community achieve greater recognition and rights over the years, they lament the infighting we often see within the community and hope we can come together to find more common ground.

As for what they want to see happen with the bar, they are keen for it to remain a venue for the rainbow community, while understanding and also hoping that the new owner may change the name and put their own mark on the place.

But what will retirement bring for this dynamic duo? Their plan is to buy a motor home, travel the country, stopping off visiting friends along the way and making new memories.

Express wishes them both all the best for their retirement. You’ve earned it!