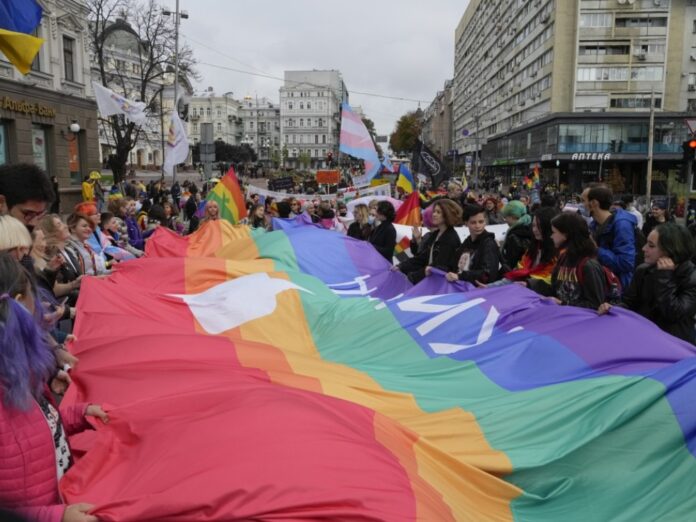 With fears of a full-on Russian invasion on Ukraine growing every day, Oksana Solonska from KyivPride speaks with express’ Matt Fistonich about what it’s like being LGBTQ+ in Ukraine, what effects a Russian takeover could have, and how Kiwis can help queer Ukrainians amid this geopolitical crisis.

How do LGBTQ+ rights compare between Ukraine and Russia currently?

“Ukraine has long taken the European direction of development and focuses on developed countries. At a time when we are at the state level discussing bills related to the protection of LGBTQ+ rights, freely going to Pride and holding rallies under the president’s office, Russia is afraid to say the word ‘gay’ on television and passes laws banning the so-called “homosexuality propaganda”.

“Therefore, we consider it inappropriate to compare modern Ukraine and a country stuck in the romance of the Soviet Union.”

What are your main fears for the Rainbow community moving forward should Russia decide to invade Ukraine?

“Russia invaded Ukraine 8 years ago, annexing Crimea and occupying parts of Donetsk and Luhansk regions. Most of all, we fear that during the deployment of active hostilities, the agenda for the protection of human rights in Ukraine will become less visible. This could be beneficial for our opponents, who are trying to slow down the adoption of bills.”

How is the community dealing with this prospect of invasion?

“The Ukrainian LGBTQ+ community is ready to defend the integrity of its state borders.”

“We were taking part in the events on the Maidan when the pro-Russian authorities were trying to take the direction of development to Russia. We have been defending our country in the occupied territories since the first year of the Russian-Ukrainian war.”

“The LGBTQ+ community has never been on the sidelines in political matters. That is why we are ready to defend ourselves, our rights and our country.”

Will members of your community plan to seek refuge should an invasion occur?

“These are veterans and volunteers of the Russian-Ukrainian war. They are definitely ready to defend our freedom. Many LGBTQ+ people have a clear pro-Ukrainian position. Therefore, we are not talking about mass migration of people.”

What does your community feel about Putin and the Russian Government?

“Putin is the occupier. Russia is an aggressor country. There can be no other attitude.”

Have many LGBTQ+ Russians fleed to Ukraine to escape Russian homophobia?

“Our organization does not have any statistics on Russian LGBTQ+ refugees. We suspect that there are.”

“We know of cases where people moved from the occupied territories of Donetsk and Luhansk regions as a result of harassment, discrimination and persecution.”

What is your message to New Zealand and the rest of the world? And how can we help?

“The most important help in the current situation is publicity and information support. It is important for us that the world understands: Ukraine is not Russia. And although there is now a risk of a Russian invasion and full-scale war, we want to emphasize that the war has been going on for eight years.”

“The LGBTQ+ community is an integral part of Ukrainian society. We are ready to defend our people and our country, to fight for freedom and our rights. And we want to set an example and inspire other countries that are also fighting for their rights.”

“Our Pride is always with us. Please subscribe to our social networks, follow the news on our website, spread our news and join The Equality March online and offline.”