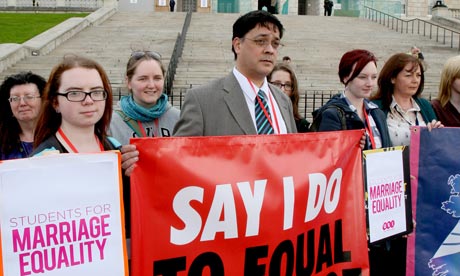 The motion to introduce marriage equality to Northern Ireland was introduced by the left wing Irish Republican party Sinn Fein.

Democratic Unionist Party Assembly member Peter Weir said his party opposed same sex marriages. “This is not a serious debate,” he said. “Clearly this motion is an attack on the symbolism of marriage and the institution of marriage and an attempt to redefine marriage. My party believes, and I believe also, that marriage is between one man and one woman and once you redefine that you lose the essence of marriage itself.”

Same sex marriage became legal in England and Wales in March 2014 and Scotland in December 2014, with Northern Ireland being the only part of the union to outlaw it.

Yesterday’s assembly vote is the fourth attempt in recent years to introduce same sex marriage to Northern Ireland and is being considered a sign of progress by many GLBT activists, with the 49 – 47 vote being the closest yet, the result was 51-43 a year ago in April 2014.