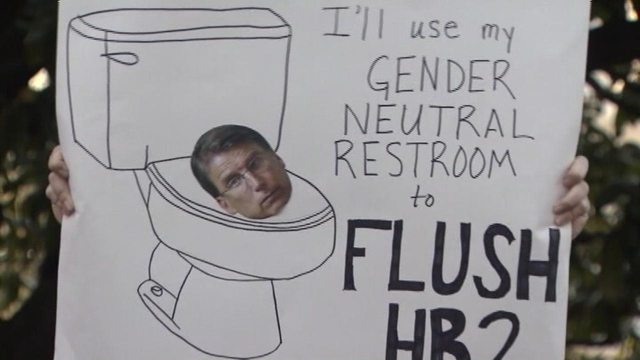 Bruce Springsteen, a well known musician and left wing advocate, has been called a “bully” after cancelling his North Carolina concert in protest to the state’s recent anti-LGBT law. HB2, also known as the Public Facilities Privacy and Security Act, is an act to provide for single-sex multiple occupancy bathroom and changing facilities in schools and public agencies and to create statewide consistency in regulation of employment and public accommodations. In short, it means that biologically born females use female designated facilities, and biologically male people must use male designated facilities.

This is to otherwise say, it’s your bits that matter and nothing else. Never mind the fact that a National Transgender Discrimination Survey recent showed more than 13% of people surveyed did not identify as male or female, and instead as “a gender not listed here.” Let’s also not consider the fact that conversations around gender identification are increasing dominating queer-based media, and quickly making its way into mainstream publications. Whether the conservatives like it or not, the days of gender dichotomy are numbered and people are becoming less and less defined by their biological make-up.

Springsteen, who has long been an advocate for queer rights and fighter in queer issues, put his foot down by cancelling his North Carolina concert. US Congressmen and conservative Republican, Mark Walker shot back, saying that he “consider[s] this a bully tactic. It’s like when a kid gets upset and says he’s going to take his ball and go home.”

The popular definition of bullying is the use of superior strength or influence to intimidate, typically to force someone to do something. With this in mind, the question that sits on the tongues of anyone who has a basic respect for universal human rights is this: what right does Mark Walker have to call Bruce Springsteen a bully when legislation he openly supports bullies GLBT people in North Carolina every day?

State-regulated law forcing transgender and genderqueer people to conform to a gender to which you can not identify simply to make cis-gendered people more comfortable seems to fit the description above, doesn’t it?

I think that being told you will be thrown out of a restaurant for using a gender identified bathroom different to your birth sex is bullying. Being victimised by a social system that allows people to legally discriminate against GLBT is state-sanctioned bullying. Being made to feel like you are a second-class citizen, or as if you are worthless because you are queer is the one of the worst kinds of bullying. It is the kind of bullying that can drive impressionable young people to self harm. It is the kind of bullying that can force suicide rates among our rainbow youth through the ceiling.

It is the kind of bullying that liberals – nay, level headed human beings – like Bruce Springsteen are meeting with a resounding NO.

So, is it bullying to walk away from those who victimise the people for embracing their true selves?

Let’s consider who the real bullies are.