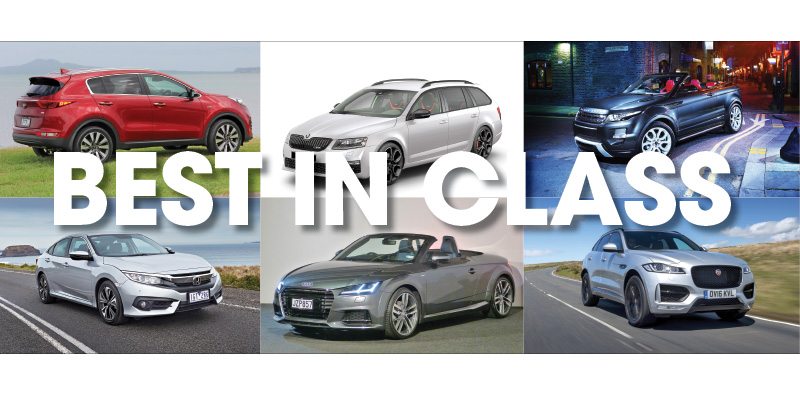 The annual express Best in Class feature for 2016 has highlighted what a great range of vehicles have become available for discerning drivers this year. express reviews and gives a gay perspective on six new models: two convertibles, two saloons and two SUVs. All of these vehicles are at, or near, the top of their class, whether that be in terms of value for money, appearance, performance or sheer desirability!

The dramatic styling of the Range Rover Evoque already makes a stunning statement. Imagine then what this convertible with huge black wheels, tapered white body and low-slung black convertible roof does! It’s a beautiful car, reflecting the long history of a design-led approach which even saw the first of the Range Rovers (from the 1970s) exhibited in the Louvre as a masterpiece of industrial design.

It’s no surprise that the designer of the Evoque (and Design Director for the whole Land Rover range), Gerry McGovern, draws his inspiration from modernist architects like Mies van der Rohe who famously said “less is more”. McGovern, who is crazy about cycling – riding an Italian Bianchi road bike – has also had a life-long passion for fashion, being a massive fan of British tailoring. He proudly claims he drives his tailors crazy with his detailed demands.

This attention to detail flows beyond the exterior of the Evoque. This model was fitted with sumptuous heated leather seats (non-standard), a highly intuitive touch-screen operating system – including a superb navigation system – and a pop-up and turn gear-selector knob. There is a very usable boot compartment (unusual for some convertibles) and the convertible roof is easily raised and lowered with the touch of a single button.

This car is far removed from the early Land Rovers and even the later Range Rovers that have been a part of our motoring history now for more than 60 years. But as a car that will serve most of its time in the city it is a practical vehicle with usable spaces and a superb, slightly raised, driving position that affords a great view of the road. If you do want to take it off-road, Land Rover also claim that this is a part of the Evoque’s DNA that will never be dispensed with.

The car is powered by a 2-litre 4-cylinder engine and I found myself using sports mode (with the circular gear selector dial!) most of the time. Even then, this is not a performance vehicle. You will not be buying this Evoque for its performance, but rather for the design statement that it makes, and its innate practicality.

Land Rover claim that more than 70 per cent of the vehicles they’ve made over the last 60 years are still operating, so if you purchase this Evoque at $118,000, it will hopefully give you a lifetime of service.

The Evoque has seen Land Rover sales soar since it was introduced in 2011, and watching the number of people who stopped to look at the convertible when it was parked outside Masa in St Heliers, I can see why. Its dramatic lines make a real statement, and this – the first convertible in the country – has added a stunning new option to this already beautiful range.

Is this the top scene stealer in New Zealand?

The renaissance of Jaguar as the auto world’s most desirable brand is nowhere more evident than in their new, just-released, F-Pace. Only Jaguar has been able to combine a large SUV – with class-leading boot and interior space – with such fabulous driving dynamics. If you think driving an SUV has to be akin to driving a truck, here is evidence that it can be just like a sports car.

You sit high in the F-Pace, which gives you an “I’m in control feel” even before you push the start button. A superb driving position with a low steering wheel and instant response means this fairly large vehicle feels so nimble, so chuckable. And boy, oh boy! The torque from this model’s diesel engine was phenomenal – want to pass? Done! So refined, so quiet, so sexy!

Fortunately, even the standard list of features looks comprehensive. Also impressive is the low carbon emission levels and the remarkable fuel economy. This stallion only does an average of 6L/100 km while achieving a 0–100km time of 6.2 seconds. Part of the secret to its performance, and driving dynamics, is the low weight of the vehicle – some 80 per cent of the body being aluminium.

The F-Pace is loaded with useful features too! Try the Activity Key – which you can wear while surfing or skiing, basically anywhere you don’t want to take the key fob. Hey presto! The car is unlocked!

The four-wheel drive gives you the ability to get onto the beach or up an icy mountain with gusto, while the sound and infotainment system is breathtaking: 380W through 11 speakers and 12 amplifier channels. If you are one who has to have more, you will be pleased that there is the digital surround sound system with 825W and 17 speakers also available.

The interior is absolutely beautiful, both in design and the quality of the finish. Many colour combinations are available, but this one had perhaps an over abundance of black including a black suede effect roof lining. The head-up display system is great and lets you get all the information you want without even looking at the dash – or even more distracting, the info screen. Inside, there is room to lounge out in the back; while outside, the bonnet bulge shouts power, and the body gap lines are tighter than a rent boy’s vest!

Move over big German SUVs, we have a new winner in both quality and driving dynamics! With a good warranty and after-sales experience, there will be no contest … until perhaps the new Maserati SUV arrives. Don’t wait!

My earliest memories of Honda Civics were of a young age: squeezed in the back of Grandad’s car, later continuing through moments at university, travelling across Europe, car shows, going skiing, heading up north. Looking back, the Civic has always had a part to play in my life.

Since the dawn of the Honda Civic more than 40 years ago, we have seen the car single-handedly choke the British small-car industry, to then hold market dominance for almost decades at a time. Honda have had to up their game big time with the more recent move from South Korea, where Hyundai are effectively playing Honda’s early game of quality products at an even lower price point.

Interestingly the car’s platform was engineered in the USA by Honda’s Marysville, Ohio, team and will form the basis for all global versions of the Civic. It also will underpin the next Accord sedan and CR-V crossover. This test covers the Honda Civic Turbo with an all new ethereally-titled ‘Earth Dreams’ 1.5 L turbo VTEC engine. Alongside already having won multiple global engine awards for its technology, power and efficiency, it’s Honda’s flagship engine for the Civic range.

The cornering capability of the new Civic is amongst the best in the small sedan class. It’s smooth and sure-footed around town, providing a great steering experience. The ride and handling are well-balanced between comfort and athleticism. Overall, this is a giant leap forward for Honda.

One neat feature worth noting is Honda’s clever lane-watch system. An absolute treat. A camera positioned in the left-hand mirror will show you a wide-angle view of what is on the left-hand side of the vehicle in the LCD screen, basically eliminating the need to rubberneck whilst changing lanes.

With this exciting respawning of the Honda Civic, the styling is something else! It does take a moment to digest: a pause, another walk around, kneeling down to look down the side of the body. Clearly it’s edgy, not just in its chiselled angular looks, but in the attitude of the designers. Honda are out to make a statement, to bring back their mojo! The car is a mixture of sporty, youthful styling without being over the top. They are obviously looking at tapping into a younger market.

And crikey, have the times moved on inside. We have all the latest equipment, including a 7.0-inch central touchscreen with Apple CarPlay/Android Auto capability, dual-zone automatic climate control, push-button start, and a digital gauge cluster with customisable information displays. The Civic has learnt from the Europeans in regards to a more sophisticated and well-structured interior, with nicer materials, and a better ambience altogether compared with the outgoing model.

At $35,500 + ORC for the 2016 Honda Civic Turbo, you are not going to find something this well put-together that looks as good as this does. Sorry Grandad, I might need to borrow those keys after all.

Look out for Part Two next week!