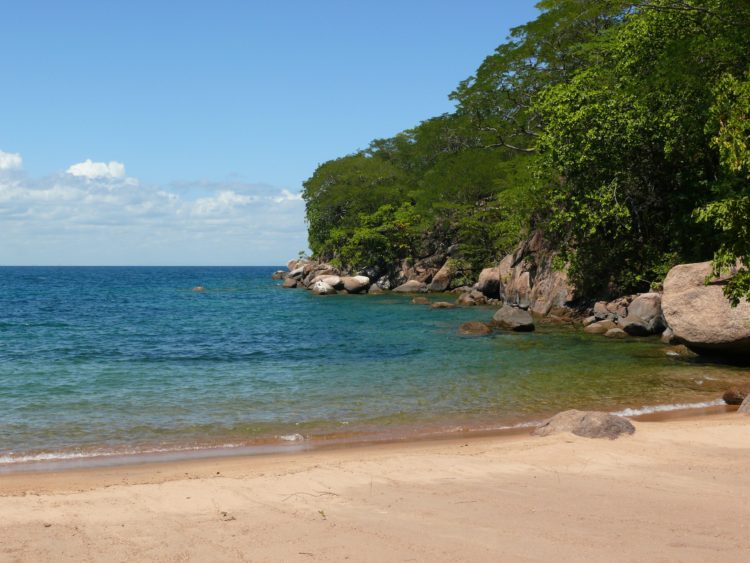 It wasn’t until the small wooden jetty on the mainland came into view at the end of the long weekend, that I realised just how deeply Mumbo Island had touched me. I wasn’t so deeply touched by the movie of some bored housewife who uses her dull marriage to justify divorcing her faithful husband and embarking on a year-long quest to exotic destinations in search of herself.

But Malawi left me feeling like I suspect Elizabeth Gilbert, author of Eat, Pray, Love, was hoping to leave her audience: changed. Strange, though, that this is the movie that came to mind because in truth, the food on the island was mediocre and the only praying was the Oh my god look at that’s that were uttered as we watched the sunset over the lake, with the moon rising behind us.

As for the love part, well, some things are not your business. Our flight to Lilongwe arrived at lunchtime, followed by a lengthy drive to Cape Maclear. The ETA was 4 hours, “subject to traffic conditions,” which I took to mean the number of cars on the road but in fact, meant how many herds of cattle were going to be crossing.

Soon, you notice that most of the shops and houses are all made from blood red bricks, these bricks being the one thing in abundance here, hand-made from the clay soil found in large areas of the country. Another thing you notice almost immediately, which seems to be common around the world, no matter how poor the people, are the countless signs advertising cell phone providers.

Bricks and cell phones, what more stable foundation could there be to build a nation on?

I’m not going to lie to you and say the journey past uneventfully. While passing a truck on a blind curve, only to find that another car was already doing the same thing, our driver edged one lane further over to pass the car passing the truck, which would have been fine had there been another lane instead of loose sand and stones, scattered with pecking chickens. We swooped through in a flurry of squawking feathers and edged in front of the car, and a moment later the truck, our driver waving cheerfully at the oncoming taxi.

Cows were bad and the journey took longer than expected, but it was still light when we arrived in the tiny village of Chembe at Cape Maclear. The boat to the island was to depart in the morning, so the night was spent on the mainland, with a sunset that poses with all the charisma of a supermodel, begging to be captured on film.

There is magic in Malawi. Despite the typical African issues of HIV and corruption, the people have hope, and with good reason.  The dirt road through the village of Chembe has the massive trunks of Baobab trees hulking down in the centre of it, which doesn’t pose a problem for the sparse traffic as most of it is horse-drawn.

It was along this road that we encountered foreigners from various countries, working at implementing water projects and HIV awareness campaigns for the World Health Organization.

Our accommodation was basic, the bathroom having been built around a tree instead of chopping it down, the shower head screwed to it, and a mosquito net over the queen size bed. The bungalow was on the shore of the lake, with just a few trees supporting hammocks breaking the view of the sun sinking below a spattering of islands dotting the horizon.

There are two options for getting to Mumbo island from the mainland; a half hour boat ride or two hours rowing yourself in a kayak. We boarded the boat (obviously) that was due to leave at nine, at 9:15. This was due to some emergency ablutionary requirements on my part that otherwise would have been unpleasant for everyone onboard. (Don’t drink from the tap!)

Halfway across, we raised our glasses merrily at the couple in their kayak, who didn’t seem nearly as happy to see us.

As you approach, Mumbo looks a bit like somebody who could only afford half a boob job; one large bump adjacent to a much smaller bump. We disembarked at the jetty on the larger, tree-covered mass, and were lead across a long wooden walkway connecting the two to our cabins.

Mumbo accommodates a maximum of sixteen guests, with six two-sleeper units scattered amongst the trees on the smaller island and a family unit on the main island. The units are widely spaced and secluded, great if, like me, you enjoy sitting naked on your own private patio that juts out over the small, half-moon-shaped bay, cocktail in hand.

Each unit has a private toilet and shower in a wooden structure overlooking the lake. Water is boiled over an open fire in metal buckets, for you to hang on a hook as a makeshift shower. The toilets are long drops, dug very deep and filled with cedar to illuminate odours.

There is no cellphone coverage on Mumbo and if there was, it would only last as long as your battery; there is no electricity, apart from a generator to light up the dining area for an hour at night.  During the day, solar-powered lamps are spread out on a rock to charge, to be handed out after supper when you head back to your cabin.

At sunset, the horizon lights up with hundreds of lanterns as the local fishermen go out to catch fish for the markets on the mainland.

The beach is pristine, and Mumbo offers arguably the best snorkelling and scuba diving in the world. With 80% of the island covered in ancient fig and baobab trees, there are endless trails to explore, taking you to secluded and private beaches all around the island.

Alternatively, you can kayak around Mumbo in an hour, as it is only 1km in diameter.

Staff are friendly, and for a truly amazing time, the entire island can be booked out if you choose to go with friends and have a gay old time.