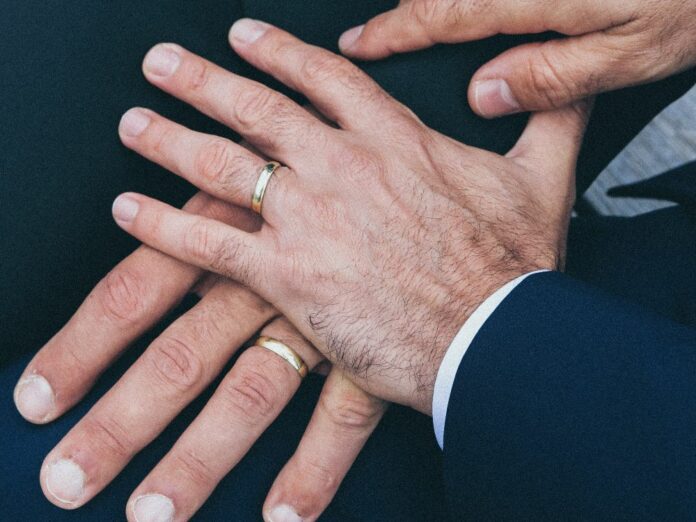 Michael Stevens is putting a ring on it, and this unexpected twist in his life story has him reflecting on activism, legality and love. Can you hear the bells?

Shopping for wedding rings – this is not something I ever imagined doing when I was a young gay man. But it’s what my fiancé and I did the other weekend. Kinda wonderful, kinda weird.

I remember being about 18 and going to a cousin’s wedding and thinking, “my family will never all come together and celebrate me being in love and starting a life with another man this way.” The thought (along with the free booze) made me cry and I remember my mother asking me what was wrong and telling her. We both got sad. But she didn’t disagree. It was literally unthinkable.

It was another mark of our criminal status. We were trash, so of course, our relationships were trash. I think that’s why there was such an intense focus on sex as the thing that identified us as gay back then. The accepted social myth was that two men or two women could never find love together, and would die alone. That was a fear expressed so often by so many parents.

At first, I was lukewarm about the whole Marriage Equality movement. I mean, yes, from a purely rights-based perspective, of course, we should be able to marry and have our relationships recognised. But also feminism had taught us to have a jaundiced view of marriage. After all, marriage was historically a property transaction, an institution designed to symbolically transfer ownership of a woman from one man to another. Did we, as gay men and women, really need this?

But when two men or two women stand up in public (cis or trans) and declare their love for each other, in front of the people they love, and the state, it is a very different thing from a dad walking a daughter down the aisle to pass her onto another man’s ownership.

And like I said, it was such an utter impossibility for most of my life. It was amazing to watch how, after the fights over the Civil Unions Bill, momentum grew for Marriage Equality, and how powerful that moment was when Louisa Wall got her Marriage Equality Bill passed through Parliament. It was one more step in the long march of legal and social change.

Social change happens. Activism can bring about change over time, but it’s never instant. And progress is not guaranteed.

Successful activism is about building alliances and finding common ground with people or groups heading in the same direction. It’s very rare any activist group is able to effect real change by themselves. So, figuring out who your friends are, who the people and groups are that you share maybe 50 -75% of the same aims with is important. You don’t need to agree on everything. You don’t need to agree on dogma or demand a standard of political purity to bring about change.

“Love is love” is such a strong message, and so hard to counter. But there was a lot o hard graft behind the scenes, getting us this far took work.

Our love, the love of all queer people, deserves every last little bit of respect as any straight couple who chooses to celebrate their lives and get married. I have always thought that the core aspect of being a gay man, for me anyway, is that desire to love and be loved by another man. Sex is just the icing on the cake, it’s not the defining factor that society used to judge us on. Being loved and being able to love back has given me more than I could have imagined.

And my family, including my mother, just can’t wait for the wedding. Michael Stevens is putting a ring on it, and this unexpected twist in his life story has him reflecting on activism, legality and love. Can you hear the bells?