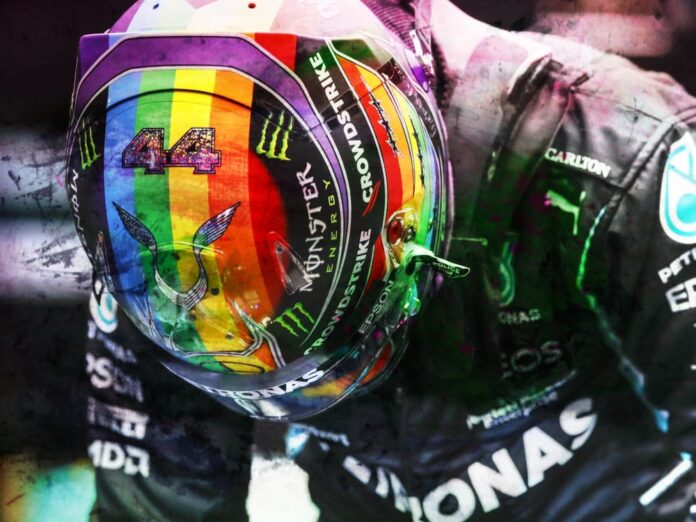 Groundbreaking Formula One Driver and Champion Lewis Hamilton has declared that he will continue to wear his Progress Pride flag helmet at the upcoming Saudi Arabian Grand Prix.

Proudly boasting the Progress pride flag and the words “We Stand Together” on his helmet, Hamilton wore the helmet at the recent Qatar Grand Prix and said he will wear the helmet again in Saudi Arabia as an act of solidarity with the rainbow community and to highlight the oppression LGBTQ+ people are facing in the Middle East.

Hamilton’s advocacy follows recent scrutiny from human rights groups who also have taken exception to F1 and its relationship with Middle Eastern nations who criminalise homosexuality.

Notably, in In Qatar where Hamilton first donned the progress flag helmet, homosexuality is illegal with laws that sentence men to jail for sodomy and even have provisions in place for men who “induce” a man to commit “immoral” acts.

LGBTQ+ people face similar punishments in Jeddah, Saudi Arabia, and then Abu Dhabi, the capital of the United Arab Emirates, where the final two races of the season will be held.

Speaking about the helmet, Hamilton says that he hasn’t received any negative feedback on his helmet to date and adds, “I will be using the same helmet through probably the last two races after this, or at least next week also.”

“On the back, it says ‘We Stand Together’ and ‘Love Is Love’, and it is important for me to support the LGBT+ community here as I know there are several situations here that are not perfect and need to be highlighted.”

“But I hope that someone reaches out, and I would love to know what is happening here and what they’re doing to help that community more, the LGBT+ community. I wear to hear,”

Currently in Saudi Arabia perceived criminal activity is not dealt with by a criminal code, rather referred to as Islamic Sharia, meaning Saudi Arabia sees homosexuality as a serious offence that can bring imprisonment, and ultimately chemical castration or even the death penalty.

Similarly, in the UAE, life in prison, forced examinations, hormone injections, and death are some of the punishments awaiting citizens who conduct homosexual acts.