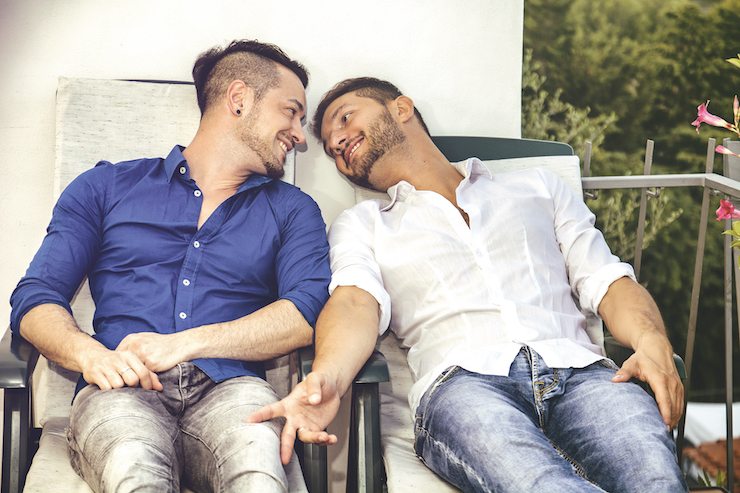 There is a common debate that comes out in support of the notion that gay relationships are easier than straight ones.

The usual argument is that we are both guys, which means we know how the other works, both physically and intellectually. It is stereotypically believed that any gay relationship is going to start with some slap-and-tickle, and only if that rocks our world (or at least wobbles it a bit) will the meat of the relationship be built upon the initial boners. With so many potential matches out there, we can’t afford to waste time, so there is some basic groundwork that is done before we get to this stage. Dating apps provides a convenient way to do the initial screening to ensure our potential objet d’shag meets the entry level requirements with regards to role, foreskin, length, girth and applicable fetishes. Criminal records, HIV status and “still living with my parents” are usually 3rd date topics.

Clean and simple. What a load of soggy condom! Being in a heterosexual relationship for over ten years, I learnt how to successfully navigate the usual clichéd questions, such as “Does this dress make my ass look fat,” and “Should we do something special for our anniversary this year?” These are such mind-numbingly boring, run-of-the-mill issues that I’m pretty sure there is a Heterosexual relationship for dummies out there that neatly deals with them, and several thousand like them. For dummies read “straight men” as women don’t appear to need or want to understand their male counterparts. If a woman buys this book it is most likely a gift for some unsuspecting guy whom she intends to mould into something that she might one day not be embarrassed to be seen in public with.

I’m grateful to be in a long-term relationship that has moved past the trivial issues, but this I have learned: the tricky questions never stop, they just change shape.

Being in a series of homosexual relationships, I learnt how to successfully navigate the usual clichéd questions, such as “Should we go clubbing tonight or spend a romantic night in?”

On the face of it, you would think the answer is obvious. The irony of it is that the more important the relationship, the more likely we are to screw it up. Yup, it is true that because we are all guys we understand how each other works physically and intellectually. It’s the “emotionally” bit that’s the bitch. And like it or not, the odds are good you are going to find your emotions getting in the way of a good shag eventually, wanting more.

It’s the gift of being human. We don’t all mature at the same pace on the hedonism scale, some of us not being ready for true intimacy until we are in our fifties, while others are ready for it in our early twenties (referred to as hopeless romantics by the former set). What happens when one person in the relationship matures past his hedonistic desires and realises that it’s no longer enough? The answer to the question “Should we invite the hot neighbour over to help us celebrate our anniversary?” is suddenly not quite so obvious. And if the partner is not on the same page, then this question might very well be the thing that ends the relationship.

I’m grateful to be in a long-term relationship that has moved past the trivial issues, but this I have learned: the tricky questions never stop, they just change shape. An additional problem with being with the same person for a long time is that your partner knows you well enough to recognise when you are fibbing, so instead of a casual “yes” or “no”, you have to dress it up in a creative way that leaves him with a slight sense that he didn’t like your answer, but with nothing concrete that he can actually latch onto.

Consider this dialogue for example, which starts with a question from my partner:

“Can you taste the difference now that I’m cooking with my La Creuset pots?”

Now, I personally have no idea how this leap of logic occurred, I think the only fact that can be gleaned from this conversation is that he is not a scientist. This is obviously the thought process of somebody very creative, capable of seeing associations where the rest of us are blind, like the guys in The Matrix who could discern some sort of order in the washy green mess of data that constantly dripped off their screens. Which means that the only correct way to answer it is with something equally creative, “no” not being it.

An insincere answer of “yes” would have been even worse, with a possible sentence of night-on-the-couch. I think a good rule of thumb is that single word answers, and single syllable answers in particular, are ultimately just going to prolong an argument that you had no idea you were even having. So now what?

First prize, of course, is to think on your feet and come up with the near perfect answer, the best being one that makes him feel good while at the same time getting you off the hook.

Something like “Absolutely, that was the tastiest asparagus I have ever eaten” might seem like a winning answer, but it’s a good thing I didn’t go with that because as it turns out, they were beans. Beware of these sorts of pitfalls.

Failing that, it’s essential to have a couple of back up plans, which I do.

The first one can be quite onerous as it entails being vigilant the entire day for any bit of scandal or information that your partner will find interesting. It has to be really juicy and/or interesting for your ruse not to be transparent. Then, when presented with an A-grade question, you act like you just remembered something you felt sure your partner would really like to know, emphasising the fact that you made a specific point of remembering it because you knew how much he would enjoy it. The implication, of course, being what an excellent boyfriend you are. It will usually start with “OMG, did you hear about……” because everybody knows that whatever follows OMG has got to be deliciously scandalous and automatically gets priority regardless of whatever conversation was in play the moment before.

The second one depends on the nature of your boyfriend. If he is the nurturing, paternal kind, you can suddenly grip your wenis (no, the skin on your elbow), wincing in what must appear to be pain that you are trying to conceal from him. If you do it properly his attention will be diverted from the minefield he was leading you through as his concern for your well-being derails his current train of thought. If your follow-through is good enough, you may even squash the issue permanently as he rushes off to get you a Transact plaster before making you a cup of tea.

If he is the slightly more self-involved sort, answering his question with a question about him might work. You know what his vanities are. It could be something like: “Are you using a different shampoo because your hair is looking really thick,” if he is a hair guy, or “Has that T-shirt shrunk? Because it’s looking really tight around your biceps,” if he started going to gym the day before. If you can muster a lustful sneer at the same time, that would be useful.

Some of you will be nodding as you read this, but I suspect many will be making the “huh?” face. That’s okay. But let me give you a little heads up.

One day you’ll be walking through Pak’nSave and you’ll find yourself putting a loaf of the flavourless, joyless, wheat free bread that looks like a cow patty into your trolley, instead of the delicious olive ciabatta – because it’s the bread he likes.

Oh, and yes, you’ll be using a trolley not a basket, because suddenly you find yourself stocking up on all sorts of novel treats and delicacies just in case he comes over. You’re buying Earle Grey and Darjeeling, even though you’re a coffee boy.

Having a selection of Champagne in the pantry now feels like a necessity, not an extravagance. You’ll have three different soaps for the shower because he mentioned how much he likes this one particular brand, but you can’t remember which one it was. And then, OMG! One morning you realise that you are texting him and he isn’t even out of your driveway yet, and, even better, he responds by phoning you to tell you he misses you too.