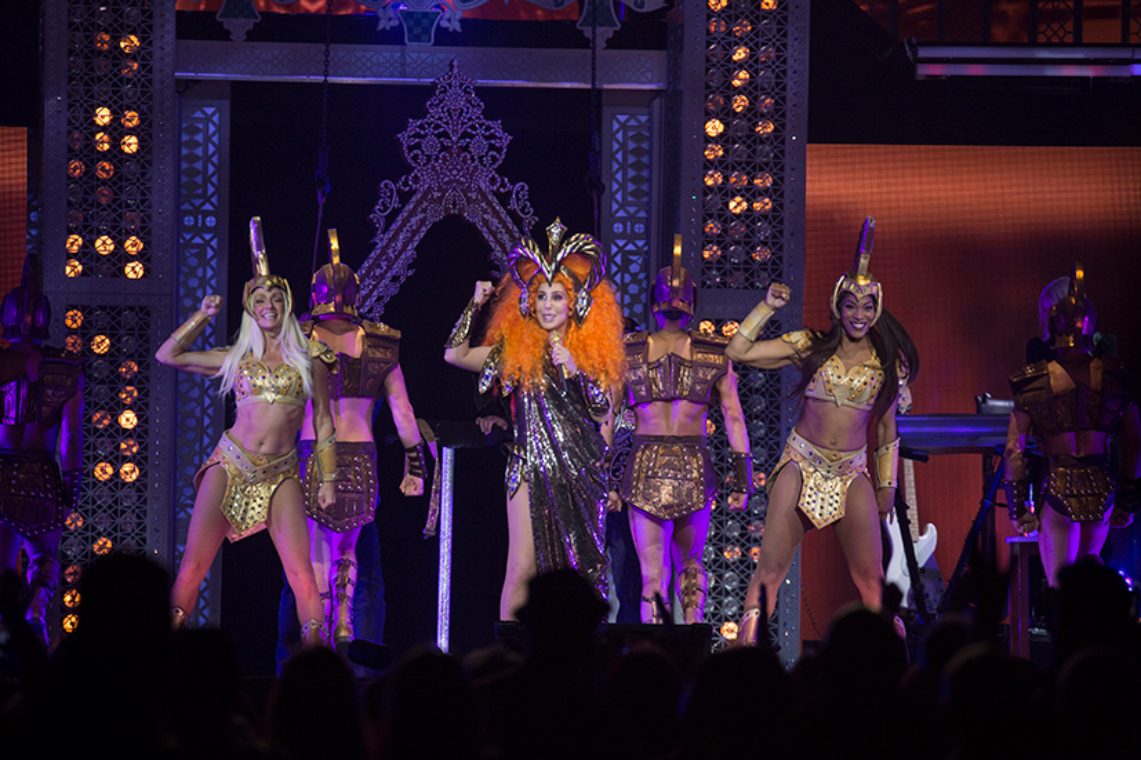 The unmistakable Cher reminds us once again that stars of her magnitude are few and far between.

The lights go down at Spark Arena and a homage to Cher’s career projects onto the stage’s curtain, with EDM hit Women’s World serving as it’s soundtrack.

It’s a telling intro that sums up the Here We Go Again tour, a show designed for Cher to pay tribute to herself. A fitting theme for an entertainer who later in the night tells us, that as an actress she never felt accepted by actors, as a singer never felt accepted by singers; but has excelled at everything she’s done.

The curtain falls and Cher is descending deity-like from the heavens on an ornate silver archway. She blasts party starters Woman’s World and Strong Enough, (delivered with live vocals, no lip sinking to be seen) before telling the audience, “my wig and I, need a drink.” The wig is orange and enormous and will be swapped out for numerous others throughout the night. 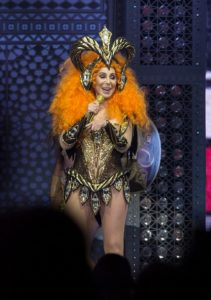 The simple two-level stage resembles a Persian palace, however every time Cher has a costume change, in effortlessly over-the-top grand-Vegas-style, her stage metamorphizes into another place in another time; whether that be a Hindu Temple, Studio 54, a Victorian Circus or Mamma Mia’s Greek Islands.

The audience are treated to highlights thick and fast and talking to people afterwards you realise everyone has a different favourite moment from the show.

For some, it’s when she dons glittery rainbow flares and duets I Got You Babe with a video of ex-husband Sonny. Cher digs deep and really belts the song while barely looking a day older than she did when she first performing at 19 years old!

For me personally, it was the debut of her Abba covers from her new Dancing Queen album. Kiwis were treated to her first live performance of Waterloo, her fabulous take on SOS and then a show-stopping rendition of Fernando, which showcased her truly remarkable ability to make such a classic song, absolutely her own.

For others, it was the site of large phallic Navy-ship canons raising to the sky, and Cher returning to the stage in THAT iconic outfit from the Turn Back Time video. The song is given a full bells and whistles treatment, climaxing with a big electric guitar solo.

For her encore, green lasers flash across the stage as her dancers get down to a dub-step breakdown that builds into Believe’s iconic ‘after love, after love, after love…’ intro. STILL not lip syncing, Cher returns in a Swarovski-crystal encrusted outfit, as the stage lights up in rainbow colours to pay homage to the song’s LGBT heritage.

It was our encore. She is our star. And there will never be another Cher.

Cher will perform this spectacular show one last time in NZ tonight at Auckland’s Spark Arena. Tickets are still available at www.ticketmaster.co.nz